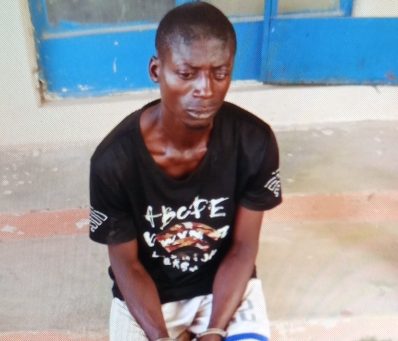 The Niger State Police Command has arrested Umar Jibril, popularly known as Ba’adama for stabbing the Chief Imam of Edati to death with an iron rod.

Jubril from Enagi village was arrested by the police over alleged culpable homicide in Edati Local Government Area of the state.

Niger State Commissioner of Police, Adamu Usman, told the News Agency of Nigeria in Minna on Tuesday that the suspect carried out the act on Monday, April 12.

Usman said on April 12 at about 0100 hours, based on credible information, Police operatives attached to Edati Division arrested the suspect.

Usman said that the suspect allegedly stabbed Alhaji Attahiru Alhassan, the chief Imam of Edagi to death with an iron rod.

During interrogation, the suspect alleged that while relaxing in front of his house on the said date in the evening, the Chief Imam of Enagi walked passed him and went towards his neighbour’s house.

The suspect explained that at about the same time his second wife, Aishatu Umar also came out and said she was going to toilet behind the compound.

He said having waited for so long without her return, he went round searching and eventually heard her voice in the neighbour’s house.

“I entered the house and met the chief Imam having affairs with my wife,” the suspect said.

The suspect further claimed that he left the scene immediately and rushed to his brother’s house, Abubakar Abdulrahamam to inform him of what he saw.

The chief imam was said to have sent for the suspect for dialogue.

In the course of discussion, an argument ensued between him and the Chief Imam.

The suspect was said to have forcefully collected the iron in the Imam’s possession and stabbed him on the neck which caused his death.

According to the CP, the suspect took to his heels and was arrested at Batati village in Lavun LGA.