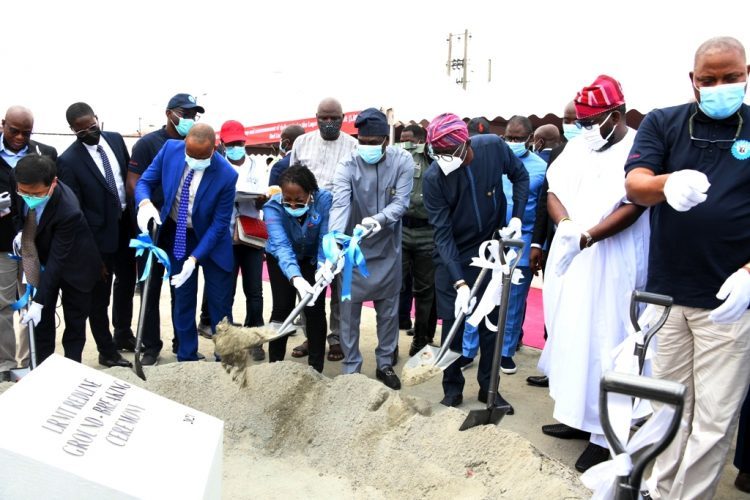 A total of 263 properties will be demolished to pave way for the multi-billion naira project.

Billions of naira have been earmarked for compensation for those whose properties would be affected.

Already, the state government has evaluated 263 properties to be demolished as well as 2,341 tenant/business owners to be compensated.

The first phase of the Red line will cover Oyingbo to Agbado with nine stations. Three of the stations will be constructed with the Lagos – Ibadan Railway Modernisation Projects by the Federal Government at Agbado, Agege and Ebute Metta Junction.

Speaking at the ground breaking ceremony of the project in Ikeja, Sanwo-Olu said the construction of infrastructure for the standard gauge Red Line, which would share tracks with the Lagos-Ibadan Railway Modernisation Projects and whose implementation starts today, is divided into two phases.

“The Red Line is a 37 kilometre rail road with 12 proposed stations. The first phase will cover Oyingbo to Agbado with nine stations. Three of the stations will be constructed with the Lagos – Ibadan Railway Modernisation Projects by the Federal Government at Agbado, Agege and Ebute Metta Junction.

“The remaining six would be constructed as independent stations at Iju, Ikeja, Oshodi, Mushin Yaba and Oyingbo. The phase two which would be mostly elevated would have stations at Iddo and Ebute-Ero before terminating at Marina where a huge interchange is planned to manage commuters on the Red, Green and Blue Rail lines, BRT buses and those using the waterways,” he said.

Sanwo-Olu stated that some of the unique characteristics of the Red Line was its integration with the Ikeja Bus Terminal, Oshodi – Abule-Egba Bus Rapid Transit, the future Orange Line, which goes from Ikeja to Agbowa, and the General Aviation Terminal One of the Murtala Muhammed International Airport through a skywalk.

The governor said this particular station which had been appropriately named Ikeja Train Centre also had facilities for Park and Ride and commercial spaces.

“Also, the Oshodi Train Station will integrate with the Oshodi Bus Terminal and provision for adequate park and ride services and commercial spaces.

“Another unique feature of the Red Line is that all the stations have elevated concourses with either at grade island or side platforms for easy boarding and alighting of passengers.

“The Red Line also integrates with our Bus Terminals at Oyingbo, Yaba, Oshodi, Ikeja and Iju, giving modal options to our people in their daily commute, either for business or leisure.

Sanwo-Olu further explained that the implementation of the Red line project had become very elevated because of the financing package put in place for it by the State Government through the Central Bank Nigeria (CBN) Differentiated Cash Reserve Requirement (DCRR) programme.

According to him, this arrangement demonstrated the capacity of the Central Bank to support projects that were economically and socially viable.

“We are grateful to President Muhammadu Buhari and the Central Bank Governor, Dr. Godwin Emefiele for the invaluable assistance to the Government and people of Lagos State.

“We can only assure you that the funding package would be judiciously utilized.
As part of this ground-breaking ceremony and in fulfillment of our promise, we are also presenting cheques as compensation to those whose property, businesses and accommodation will be affected by this project. Beneficiaries of this payment are those that have been verified to be bona fide property owners, business owners and tenants of buildings,” he stated.

Highlight of the event was the presentation of cheques to some people who were affected by the railway project.