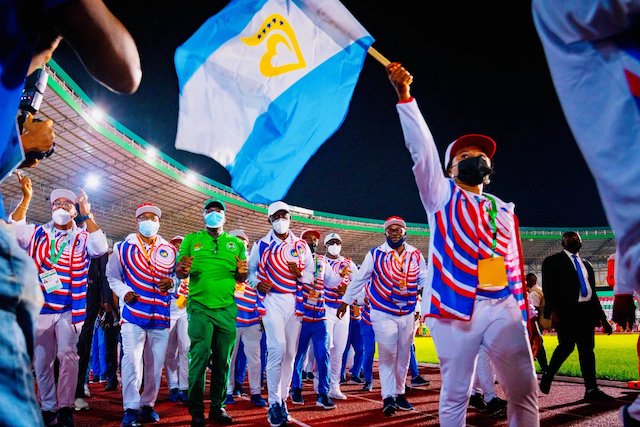 Delta state, champion of the 2020 National Sports Festival held in Edo state, has been confirmed as the host for the 2022 edition.

This was announced Wednesday amid the colourful closing ceremony of the festival at Samuel Ogbemudia Stadium in Benin.

The announcement was made by Nebeolisa Anako, who represented Sports minister, Chief Sunday Dare.

Anako, the permanent secretary of the ministry said Delta emerged tops after the selection process.

“After a rigorous exercise, from last year when six states expressed interests to host the NSF, the Big Heart, Delta, came out tops. The next NSF will be held in 2022 in Delta,’’ he said.

Host of the 2020 version, Edo put on display its rich culture, while musicians, such as Teni, JoeBoy and Franchize also thrilled the crowd at the closing ceremony.

Delta retained its championship by winning a total of 384 medals, 158 of which were gold.

In the third place was Bayelsa with 169 medals.Rivers completed the South South dominance of the games with 128 medals.

Lagos was fifth with 126 medals. 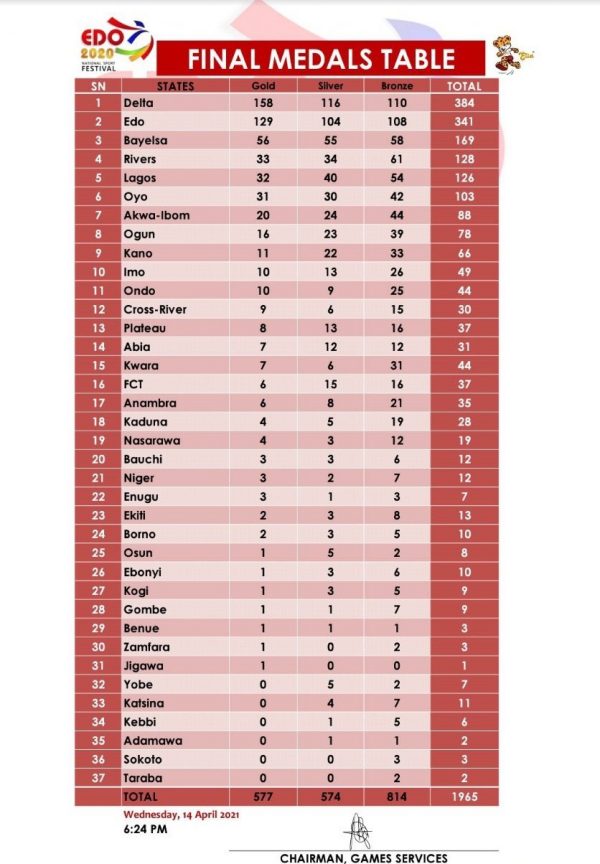 Delta governor, Ifeanyi Okowa saluted the state contingent in a tweet Wednesday night: “To all our athletes, coaches and technical staff: #WeDidIt!

“All your long hours on and off the track and fields have paid off! On behalf of the government and people of our great state, Delta: We are proud of you!”

Obaseki said the hosting of the 20th National Sports Festival (NSF) tagged “Edo 2020” has rekindled the nation’s spirit of unity and the peoples’ togetherness.

“The festival has rekindled the spirit of unity and togetherness as a people and nation, and we have seen the display of enviable sportsmanship that represents the true spirit of Nigeria.

“We (Edo) are all happy to have hosted the country, and we are very excited that in spite of the challenges we hosted a successful event.

“Dear athletes from all over Nigeria, you have shown how sports can bring people together even in a fragile world.

“You have shown how sports can build bridges, and as you go back to your states, I urge all of you not to forget the bond of oneness that you have formed on this ground.

“There is the need to sustain and propagate the spirit of togetherness. There is no denying the fact that you have been great ambassadors of your various states.

“I congratulate the winners of the 20th edition of the National Sports Festival, Team Delta for putting on up a strong showing to defend your status as champions.

“I also applaud Team Edo which came second in the competition for your determination and hard work.Put together, this is the spirit of Bendel.

“To the organisers of ’Edo 2020’, I say ‘thank you’ from the bottom of my heart. I congratulate you for introducing new standards to the Nigerian sports festival,” Obaseki said.

The governor also congratulated President Muhammadu Buhari for his immense support and personal commitment of making the games successful in every way.