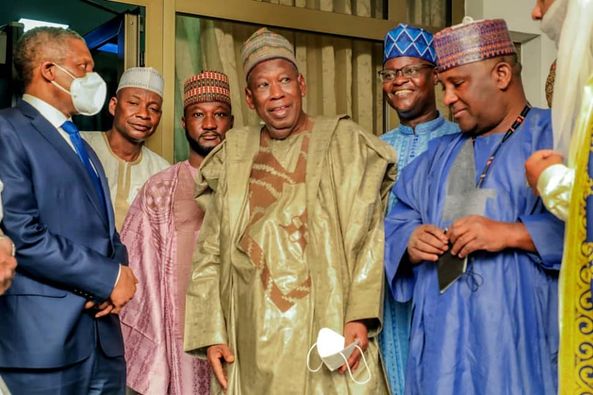 Abba Anwar, Chief Press Secretary to the Governor of Kano State, in a statement today, said this was achieved with the good support of the renowned business mogul, Alhaji Aminu Alhassan Dantata, Kano Emirate, and the Kano State Council of Imams.

The reconciliation meeting took place at Kano Governor’s Lodge, Asokoro, Abuja, Wednesday, which put a stop to all reports that the duo were in dispute over sugar control in the country.

However, they both dismissed the allegation that Dangote was planning to see to the increase of sugar price, by pressuring BUA to succumb to the increment.

They described that allegation as baseless and lacking any iota of truth.

The meeting was seen as the zenith of other similar efforts to reconcile the two giants by the governor.

Alhaji Aminu Alhassan Dantata played the role of a father during the meeting.

However, the two business moguls agreed to work together as brothers for the growth and development of the nation at large.

Backward integration is a business model in which a firm expands into its supply chain rather than buy raw materials elsewhere.

As an example, instead of buying maize from external suppliers like farmers, a company producing infant food may choose to invest and own maize farms and supply itself. This often helps in reducing costs. There is also forward integration, in which a company buys its own products for other purposes.

In the sugar context, the Nigerian government through the regulator, NSDC, has mandated sugar companies to not just build refineries and process imported sugar extract, but invest in developing the supply side — namely, sugar cane plantations. This is expected to reduce Nigeria’s import-dependence, stimulate the economy, create jobs and support the Naira.

While that is being developed to meet the country’s demand volume, the NSDC allocates quotas of sugar extract firms can bring into the country based on its backward integration investment size.

Dangote Sugar Plc, supported by Flour Mills of Nigeria Plc, two of Nigeria largest sugar makers, argued that BUA has not met the backward integration requirement of the government to set up a new refinery, which they believe would confer an advantage on the firm. The government had in 2019 assured that no new sugar refinery would be allowed for now, they said.

In a joint letter to the Minister of Industry, Trade and Investment, Niyi Adebayo, Mr Dangote and John Coumantaros, respectively chairs of Dangote Sugar and Flour Mills of Nigeria, argued that BUA’s new refinery in Port Harcourt could stand-in the way of “the attainment of the National Sugar Master Plan (NSMP) and the sustainability of Nigeria’s local sugar industry.”

BUA Sugar, however, responded to the allegation in February.

BUA said it took “serious exception to the ludicrous claims by its two major competitors that it aims to circumvent the BIP of the sugar industry” and said it has invested billions of Naira in the backward integration policy of the government.

However, at the reconciliation meeting on Wednesday, Dangote and BUA assured that, henceforth, there would be no differences, that could cause any disharmony between them.