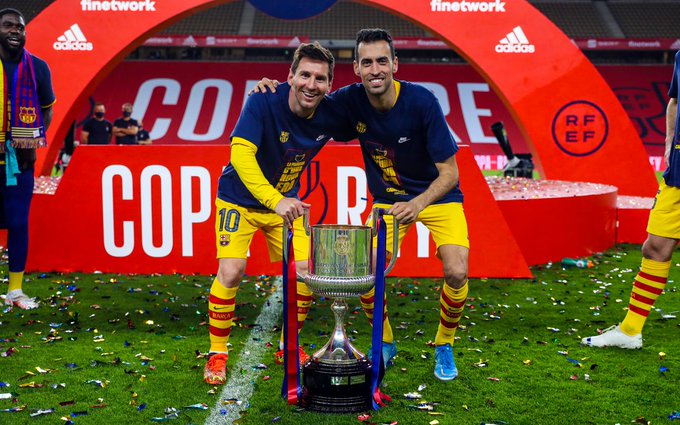 Messi and another team mate with the Copa del Rey

Lionel Messi and Frenkie de Jong inspired FC Barcelona to a 4-0 thrashing of Athletic Bilbao on Saturday to win the Copa del Rey for a record 31st time.

The Catalans picked up their first silverware of the season and gained revenge for their Spanish Super Cup defeat by Athletic Bilbao in January with a convincing victory.

The Basques, who lost the postponed 2020 final a fortnight ago also at La Cartuja in Seville, have not won the cup since 1984, when they beat FC Barcelona.

Ronald Koeman’s side, in search of their first trophy for almost two years, started well and almost went ahead when De Jong fired against the post from Messi’s cut-back.

It was the best opportunity of a first half which they dominated, without creating too many clear-cut chances.

Messi had a shot blocked and a free-kick which hit the wall, while Inigo Martinez flicked an effort inches wide at the other end.

Antoine Griezmann should have broken the deadlock in the second half but was denied from point-blank range by Athletic Bilbao goalkeeper Unai Simon.

Eventually FC Barcelona broke the deadlock on the hour mark, with Griezmann making amends for his earlier miss by sweeping home from De Jong’s cross.

The Dutchman headed home the second to end Athletic Bilbao’s resistance, before Messi struck a superb brace to give new Club president Joan Laporta the first trophy of his second reign.

“It’s very special to be captain of this club, where I’ve spent half my life,” said Messi, whose contract expires in the summer.

“It’s a very special cup for me to be able to lift. It’s a pity we can’t celebrate with our fans.

“It was a hard year for us and to be able to celebrate this and try and win La Liga is very important. It’s a transition year, and with a lot of young players, the team has become stronger.”

Messi’s future is unknown but in the present he is still proving decisive for his club.

The Argentine’s first goal was a work of art, playing a one-two with De Jong and finishing coolly, while the second was a well-taken effort from the edge of the area.

“I hope it’s not (Messi’s last trophy for Barca,” added coach Koeman. “I hope that he stays with us.”

The Dutchman does not know if he will be at the club next season either, with Laporta not confirming if he is planning to keep Koeman on FC Barcelona’s bench.

But this emphatic cup victory will do his chances no harm.

It was the perfect way for FC Barcelona to recover from last weekend’s Clasico defeat in La Liga.

But, there, they still have a good chance of deposing leaders and reigning champions Real Madrid.(dpa/NAN)