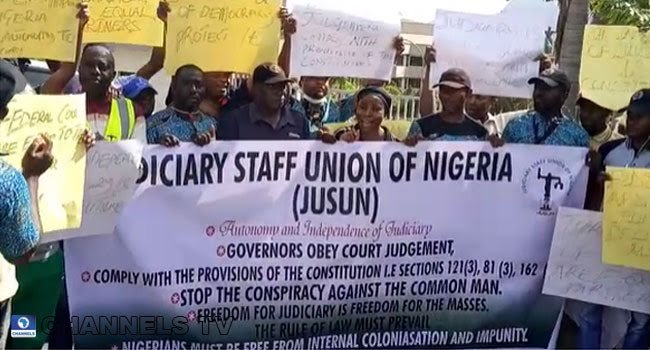 Members of the Judiciary Staff Union of Nigeria (JUSUN) members have kick-started a nationwide protest, say no retreat, no surrender.

The workers began the protest on Monday over the financial autonomy of the Judiciary.

The union had on April 6, commenced nationwide industrial action, shutting down all courts in the country including the Supreme Court, to protest the refusal of governors to comply with the constitutional provisions for financial autonomy of the Judiciary.

The protest is being led in Abuja by Comrade Jimoh Alonge, the National Treasurer of the union, who vowed they will not back down on the strike and protest until their demands are met.

JUSUN had on Friday threatened to begin a mass peaceful protest.

Alonge, while speaking with journalists at the Court of Appeal headquarters, the take-off point of the protest to the National Assembly, stated that the judiciary is confronted with myriads of problems, but noted that once the issue of financial autonomy is addressed, others would be taken care of.

He accused the governors of Ebonyi and Kaduna States of undermining the judiciary in their states, warning that the judiciary would no longer tolerate such from anyone.