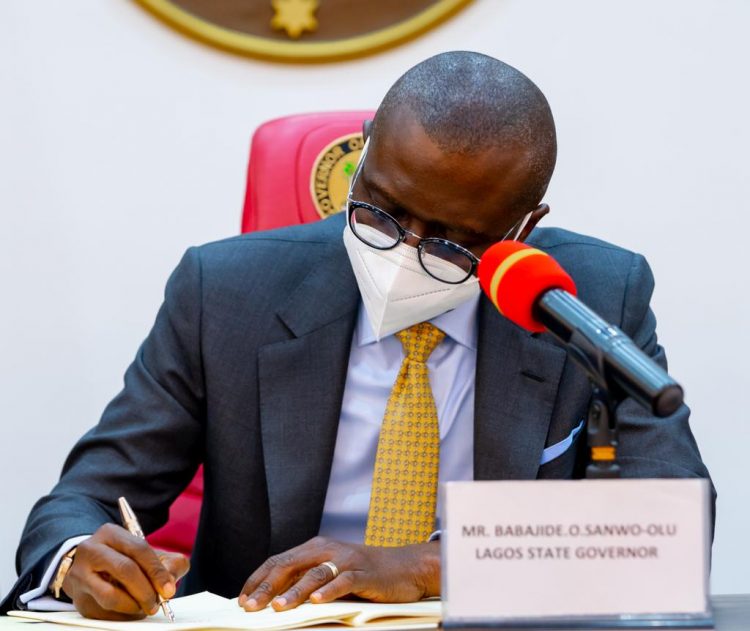 Corrupt civil servants and contractors in Lagos are in trouble as Governor Babajide Sanwo-Olu on Monday signed into law Public Complaints and Anti-Corruption Commission Bill of 2021.

With the signing of the bill into law, an anti-corruption commission will be set up in days.

The commission is backed by the instrument of law to investigate and prosecute officials of the state government and registered contractors indicted for economic crimes and financial misappropriation.

The legislation, sponsored by the executive arm of the Government, was signed into law days after it was passed by the House of Assembly.

Also, Sanwo-Olu assented to the Lagos State Lotteries and Gaming Authority Bill of 2021, initiated by the executive arm to coordinate activities of lotteries agencies operating within the State.

Speaking at the signing of the bill, Sanwo-Olu said the action was a testimony to the State Government’s effort towards entrenching accountability in governance and checking malfeasance among officers entrusted with public resources.

The governor said the bill establishing Public Complaints and Anti-Corruption Commission was an important legislation critical to the delivery of quality services to the citizens.

“When we came in, we had said we would be accountable and responsible in the appropriation of the State’s resources. We want to stand in front of the citizens to give account on how public funds are being spent.

“To give credence to this promise, the executive arm initiated the bill and sent to the Assembly for approval. We believe that this law would not only ensure accountability of public funds, responsibility of public office, but also promote dialogue among public officers to keep the trust of the people in the discharge of their duties in line with transparency.

“The anti-corruption commission will ensure that all approved activities are implemented in accordance with budgetary allocation,” he said.

Sanwo-Olu said the anti-corruption commission would be independent in its operations and functions, pointing out that the agency would complement efforts of similar agencies in the police and federal establishment.

The Lotteries and Gaming Authority Bill of 2021, the Governor disclosed, is to simplify and incorporate technological innovations in the gaming sector.

According to him, the law sought to harmonise five gaming and lottery formats, such as casino, jackpot, pool, lotto and sports betting, thereby regulating the sector and checking fraudulent activities of unregistered game centres within the State.

Sanwo-Olu said the former lottery law of the State did not meet the contemporary needs in the industry, which was why the executive initiated the bill to accommodate technology in regulating the business.

“As a forward-looking Government, we are doing the needful to ensure fair play, regulation and monitoring is brought back into the gaming industry. The law is not in any form to stifle investment, but to offer better platform for lottery companies to enhance equity, transparency and make their investment more rewarding,” the Governor said.

Sanwo-Olu reiterated that his Government’s actions would continue to be taken in a way that would boost confidence of the public and promote accountability in governance.

He thanked the Speaker and members of the Assembly for cooperating with the executive arm and consistently prioritisng executive bills aimed at delivering good governance.

Attorney General and Commissioner for Justice, Mr. Moyosore Onigbanjo, SAN, said the two bills signed by the Governor made it 10th legislation sponsored by the executive and passed by the House of Assembly to strengthen good governance. Twenty-six executive bills, he said, have been initiated since inception of the current administration.

He said: “The anti-corruption commission agency to be established is akin to Economic and Financial Crimes Commission (EFCC) to prosecute misappropriation of public funds in the State. The chairman of the agency will be appointed by Mr. Governor, subject to the ratification of the House of Assembly. If the investigation leads to prima facie case, the offender will be prosecuted in the court.”

Chairman of the House Committee on Finance, Hon. Rotimi Olowo, and his counterpart in Public Complaints and Judiciary, Hon. Victor Akande, attended the event.