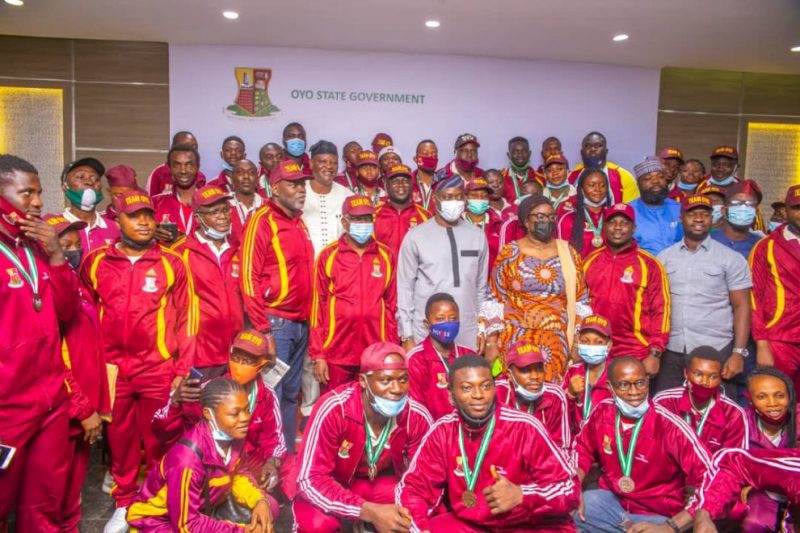 The Governor announced this at the welcoming ceremony for the Oyo State athletes held today at the Governor’s office, Oyo State Secretariat, Agodi, Ibadan.

Makinde expressed joy at the result and commended the athletes and their coaches for a job well done and for making Oyo state proud. According to him, Oyo State will soon produce world record holders.

“It is with great pleasure that I welcome our athletes, our fighters, from Edo state. I am glad about the results and I want to commend the athletes and the coaches for a job well done and making Oyo state proud.

“For us to show appreciation to our medalist and the coaches, we won’t promise you something we won’t be able to do. I will make some pledges now and it has to be done within the next two weeks, maximum.

Furthermore, Makinde pledged that his administration will continue to encourage youth participation in sports even at the grassroots level adding that facilities are being put in place to ensure that the state produces World record-holders in the future.

In his words,” This government will continue to encourage sports development even at the grass-root level. That is why, across the geopolitical zones of Oyo State, we are upgrading sports facilities so we should start seeing the results from that investment. I’m sure we will see instant results at the next national sports festival which is scheduled to take place next year.

“This government has been committing a lot of resources towards sports development in Oyo state. Apart from the Lekan Salami Stadium that is undergoing serious upgrade right now, the same type of track pattern where Usain Bolt made history is the same one that is being installed at Lekan Salami Stadium so, in the years to come, I believe we would also produce our world record holders in Oyo State.”

Meanwhile, the Governor also injected some humour into his remarks by issuing a challenge to some of the medalists, notably the tennis and Ayo Olopon gold medalists, stating that if he beat them in a match, he would represent the state at the next sports festival.

His words, “And for some of you, especially the tennis medalists, for me to believe your medal, you have to beat me in a game of tennis. So, I’m going to be organising to match up with you, so don’t rest on your oars.

“The Ayo Olopon medalists, actually I need to invite you to my house this weekend, I have one and I’ve been everybody so I need you to show me how you won the medal.

“If I beat you, I am going for the next National sports festival.”

Gov Makinde further reiterated his continued support for the athletes adding that he has set a goal of 100 gold medals for the next edition of the sports Festival which comes up next year.

He said, “I’ve set a target of at least 100 gold medals for the next sports festival and everything that will aid the realization of that vision will definitely be put in place.

“I’ve listened to the request put forward by the sports Council. One assurance I can give to you is that Oyo State will continue to encourage its own athletes to even do more.

“When we came in as an administration and we saw the file on the medalists at the 2018 event.

“People can make promises and without mincing words, we met several unfulfilled promises. We tried to investigate why those promises were never fulfilled and we found out that there was no intention from day one to fulfil those promises because we discovered that none of the processes of fulfilling the promise was embarked on.

“But, we picked it up and within the limited resources that were available to us, we fulfilled a percentage of those promises that were made.

“I believe that even for this particular event, we encouraged the Oyo state sports Council to give something to the medalists instantly they confirmed that they won a medal and I saw pictures of that.
“If some states are trying to poach you, you don’t need to go because Oyo state will definitely provide the required atmosphere for you to train and grow.

“So, on behalf of the government and the people of Oyo State, we want to first congratulate you, thank you for making us proud and we want to wish you the best in your careers and future competitions. We are here to support you, we are rooting for you and I look forward to training and competing lightly with some of you”, he concluded.