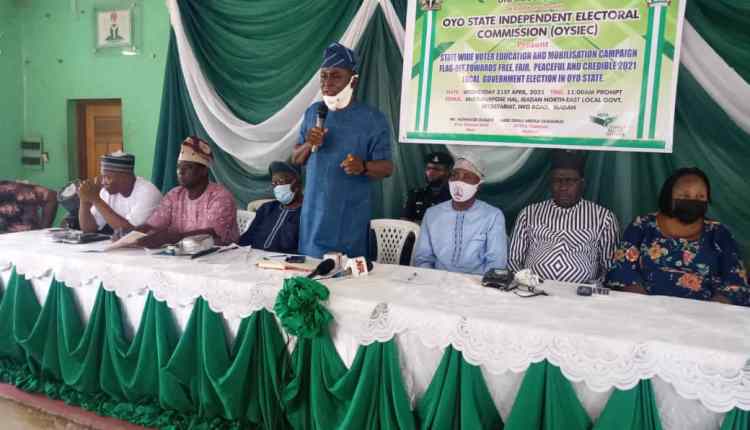 The Oyo State Independent Electoral Commission (OYSIEC) has postponed the local government election to May 22, 2021.

OYSIEC Chairman, Mr Isiaka Olagunju who announced the postponement, said it became necessary after realizing that the previous date, May I5, fell on one of the Eid-el-Fitr holidays.

According to him, the success of the election would hinge on voter turnout on Election Day.

The chairman took the time to list the four other documents voters can identify themselves with apart from their Permanent Voter’s Card (PVC). The documents are: Temporary Voters slip, National Identity Card, International Passport and Drivers License.

He stated that it was imperative for the name on the voter’s identification document(s) to match the name in the Voters’ register that will be displayed in all 33 LGAs in the state next week.

Olagunju also sounded a note of warning to the relevant security agencies, asking them to arrest anyone at the polls to cause trouble that day.

Mr Moshood Olaleye, the NOA Director of Oyo State urged voters to elect credible candidates that have been proven worthy of public trust. He also warned the voters and stakeholders not to incite violence at the polls, stating that there would be a statewide sensitization campaign held by the NOA to guard against that.

He rounded up his remarks by adding that residents should involve themselves in the electoral process and come out en masse on Election Day to cast their votes and observe the process.

The Inter-Party Advisory Committee(IPAC) Chairman, Mr Fagbemi Adegbenro also echoed the chairman while speaking and called on all relevant security agencies to protect all law-abiding voters that day and to make sure that any violence or voter intimidation would be instantly nipped in the bud.

The Department of State Services also had a representative, Margaret Ayoola present who charged traditional and religious rulers to speak to their subjects and advise them to avoid getting involved in any violence during the electoral process.

Representatives of other security agencies such as; Correctional Service, Nigeria Immigration Service, and Federal Road Safety Corps etc. also urged registered residents to come out in large numbers to vote during the election