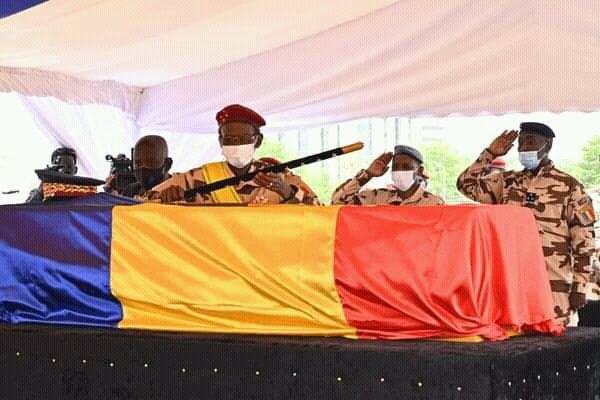 France’s President Emmanuel Macron and some other heads of state attended the funeral ceremony of slain Chad’s president, Idriss Deby on Friday.

Thousands of Chadians thronged the venue to catch a last glimpse of Deby before he is lowered to the grave in a private burial.

Deby was killed in battle with rebel groups in Chad on Monday.

The First Lady, Hinda Deby Itno, expressed her thanks for outpouring of solidarity.

“This morning I made an effort to speak (…) The Marshal of Chad Idriss Deby Itno was for me an exemplary husband. The Marshal of Chad is no more, but God is still there and consoles all the weeping hearts. Our guide is no longer, but the Shepherd’s Star shines in the sky to direct us to the right port, ”said Hinda.

She added: “Standing in front of all dangers, its immersion in the great mass and its communication with the populations are not to be demonstrated. This love is felt in the depths of every Chadian.”

Hinda called on Chadians to hold hands to carry the values ​​of national cohesion, without prejudging their origins.

“Fatherland, honour and dignity, this is a triptych to which the Marshal was very attached. It is up to us to make the most of the investments that the Marshal has made in our favour. Marshal of Chad, now you are gone, Farewell! You will be in our hearts.

“Life has decided on your departure and I must say goodbye to you. The Chadian people have loved you and give you back to God,” she mourned.

Speaking, Macron said Deby lived as a soldier and died as a soldier with weapons in hand, adding that he gave his life for Chad in defence of its citizens.

“We will not let anybody put into question or threaten today or tomorrow Chad’s stability and territorial integrity,” he said.

According to the BBC, the ceremony also saw a military march-past and a speech by Déby’s son, Gen Mahamat “Kaka” Déby Itno, who the army has named as the country’s new leader.

He vowed to “stay loyal to the memory” of his father and pledged to continue the legacy of “dialogue, forgiveness, peace, unity” that the late president was “admired for”.