Macron to Chadian rebels: France will fight you 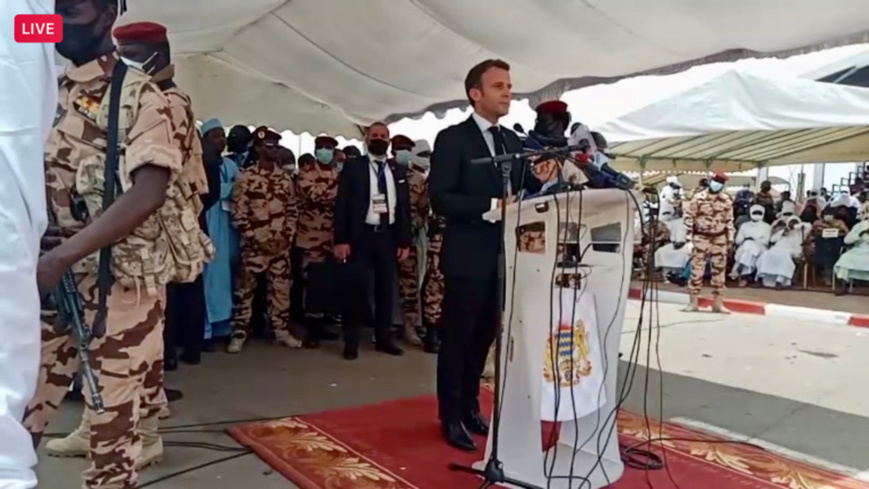 French President Emmanuel Macron said on Friday that his country will not allow anyone to threaten the stability of Chad.

Macron spoke in N’djamena in a tribute to late President Idriss Deby Itno who was killed on the battle front by Chadian rebels on Monday.

The rebels had doubled down by threatening to invade N’djamena.

“France will not allow anyone to question or threaten the stability and integrity of Chad,” Macron said at the lying-in-state for Deby, now posthumously a Field Marshall.

“France will also be there to keep alive without delay the promise of a peaceful Chad for all of its children”.

“The transition will have this role to play: stability, inclusion, dialogue, democratic transition, and we are and will be at your side,” said Macron at the funeral at Place de la Nation

Macron arrived N’Djamena on Thursday to attend the funeral.

“After three decades and so many brave battles, the battles you have waged are still aimed at the defence of the homeland, the preservation of stability and peace, the struggle for freedom and security. You lived as a soldier, you died as a soldier, arms in hand, ”he said in memory of the late president.

“Despite the horrors encountered on his way, the war will have been for Idriss Deby Itno, “the ultimate duty to defend his homeland”, Macron said.

Macron said Idriss Deby earned the respect of all, friends and enemies, as “an exemplary leader and a courageous warrior”

“For eight years, several thousand of our soldiers have been fighting bitterly, side by side, in the Sahel ”, declared the French president.

Macron pledged France’s support for the transition process underway in Chad, saying it is for a stable and “a peaceful Chad”.

In the face of possible attacks of Chad, Macron declared: “France will not let either today or tomorrow threaten the stability of this country.”