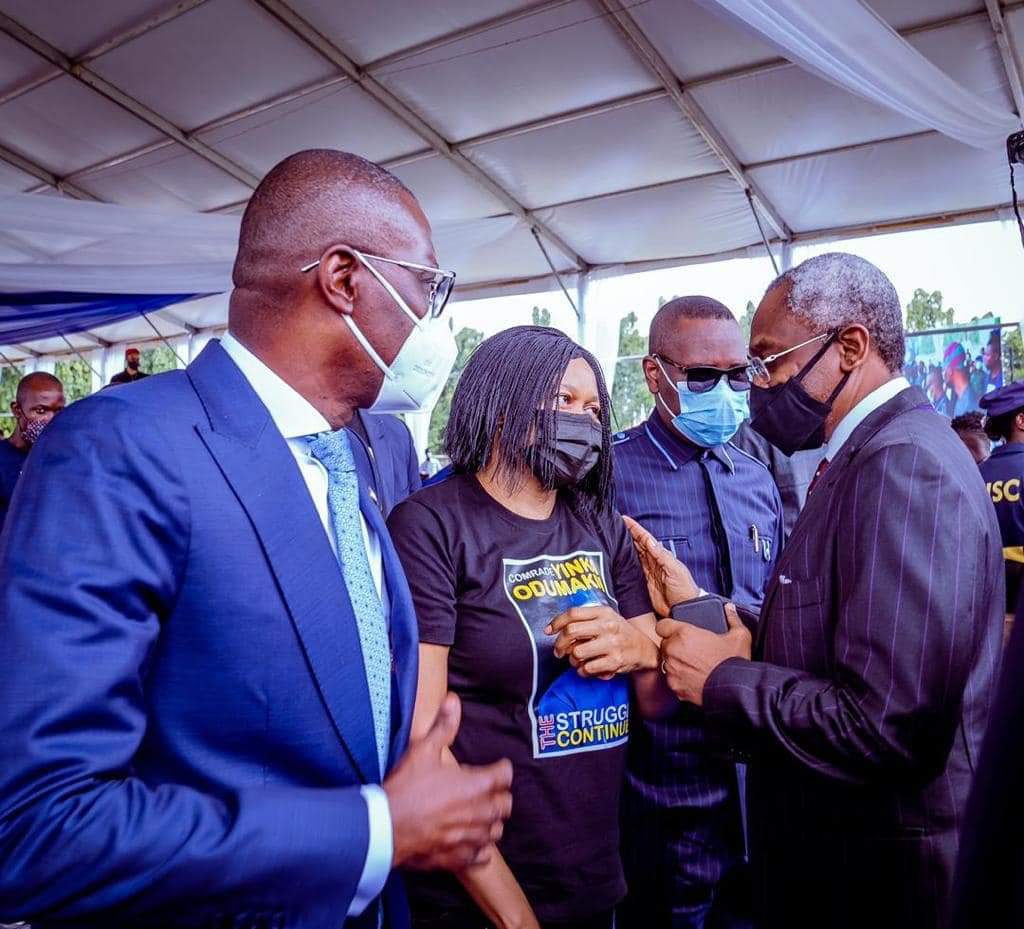 Sanwo-Olu and Gbajabiamila also spoke at a lying-in-state, day of tributes and service of songs held on Thursday at Police College, Ikeja as parts of the funeral rites for the late human rights activist.

The governor charged politicians and members of the Civil Society Organisations, to uphold the legacy and struggle of the late comrade.

According to Sanwo-Olu, ‘comrades of like minds’ should not abruptly end what Yinka Odumakin believed, stood, and worked for during his lifetime.

The Governor also charged them to keep working hard for a Nigeria that will be a land of justice, fairness, and where equity would become the watchword and reflect true federalism.

In his words, “Yinka was one-half of the most formidable couple that we have seen in our history and the other half is his beloved wife, Dr. Joe Okei-Odumakin, who now sadly has to continue this struggle without her husband, fellow comrade and big friend that I know he is to her. My sister, you will continue to push on strongly in the trenches.

“But the Almighty God who we cannot query did not allow Yinka to finish. As some people have said, he was a fighter who fell in his prime.

“At a time like this, we are all short of words but we will continue to hold on to the legacy and what he believed and lived for. All comrades of like minds should ensure that they don’t abruptly end what Yinka Odumakin stood for, what he believed in and what he had worked for. That is a charge for each and every one of us.”

Adebanjo, who broke the barrier of culture to attend the funeral rites, urged human rights activists to continue in the spirit Yinka Odumakin, by being courageous and fearless if they truly love the deceased.

“I am not God, I am a human being. There is nothing impossible for God to do but as a human being, I will say it will be difficult to replace Yinka. Where can we find a young man of his age, not materialistic pursuing a cause he believes in selflessly, courageously, relentlessly, and consistently? Yinka, God knows you are a blessing to Nigeria,” he said.

Speaking in tears, Adebanjo said: “It is not easy to talk about Yinka. Yinka is an irreplaceable material. Why should I be here? You can’t question him, leaving a man of 93 to take a man of 55-years. God, you are omnipotent, please replace him quickly for us.”

Also speaking, the Speaker of the House of Representatives, Rt. Hon. Femi Gbajabiamila said he left the Green chamber where he was presiding to pay last respect to the late Odumakin, who he described as “a man of courage, integrity, true democrat and a man who stood for truth and nothing else”

The Speaker, therefore, charged Nigerians to make a positive impact during their lifetime by rendering service to humanity so that they can be remembered after their demise.

The widow of the late Afenifere spokesman, Dr. Joe Okei-Odumakin, who described her husband as an “encyclopedia of positive activism” said the tributes by Nigerians will continue to embolden her to do more by continuing what her husband fought and stood for.

“One thing that will never make me break down are that his ideals will live forever; his legacy will remain. All that he has lived for remains. Yinka, you are not dead; you are alive, you will continue to live in our unconsciousness. And to live in the unconsciousness of the people, is to live forever. Yinka Odumakin, my comrade lives on,” she said.