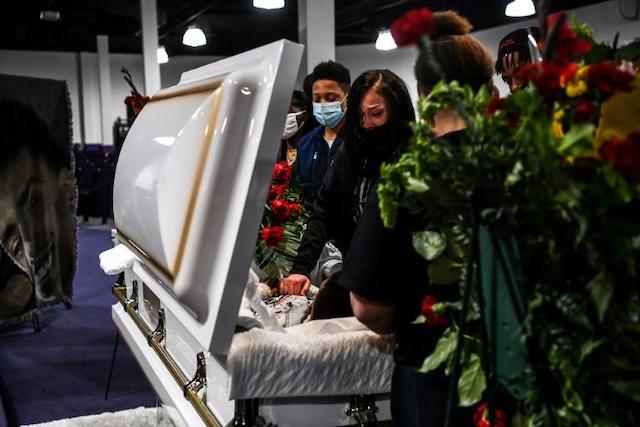 Daunte Wright's mum Katie sobs by the casket of the son

Hundreds of mourners, wearing face masks and weeping, filled a Minneapolis church on Thursday for the funeral of Daunte Wright, a 20 year-old Black man, killed by a policewoman.

His shooting on 11 April in a Minneapolis suburb by the police after a traffic stop sparked fresh concerns over the way cops treat people of colour.

Wright was laid to rest two days after a Minneapolis jury found a white police officer guilty of murdering George Floyd last May, a killing that triggered worldwide protests for racial justice.

On Thursday, Wright lay in a white casket at centre of church, covered in red roses. His family members sat near the front of the church, wiping tears from their faces as an organist played gospel music.

“My son had a smile that was worth a million dollars. When he walked in the room, he lit up the room,” says Katie Wright, Daunte’s mother, who fought through sobs as she spoke.

Other family members, cousins and siblings, remembered Daunte as “the life of the party” and a father who lived for his beloved two-year-old son Daunte Jr.

His aunt, Naisha Wright, wrote a tribute on a prayer card handed out to attendees, recalling how she playfully nicknamed Daunte “lemon head” and how he would smile.

Wright was a talented basketball player and he particularly loved the Fourth of July, when he would celebrate with his family by lighting fireworks, the prayer card said.

Among the attendees at Shiloh Temple International Ministries, a church with a predominantly Black congregation, were Minnesota Governor Tim Walz, U.S. Senator from Minnesota Amy Klobuchar and U.S. Representative Ilhan Omar, who represents the congressional district encompassing Minneapolis and some of its suburbs.

George Floyd’s family was in attendance, as well as the loved ones of several other Black Americans who were killed: the mother of Philando Castile, the family of Emmett Till, the boyfriend of Breonna Taylor.