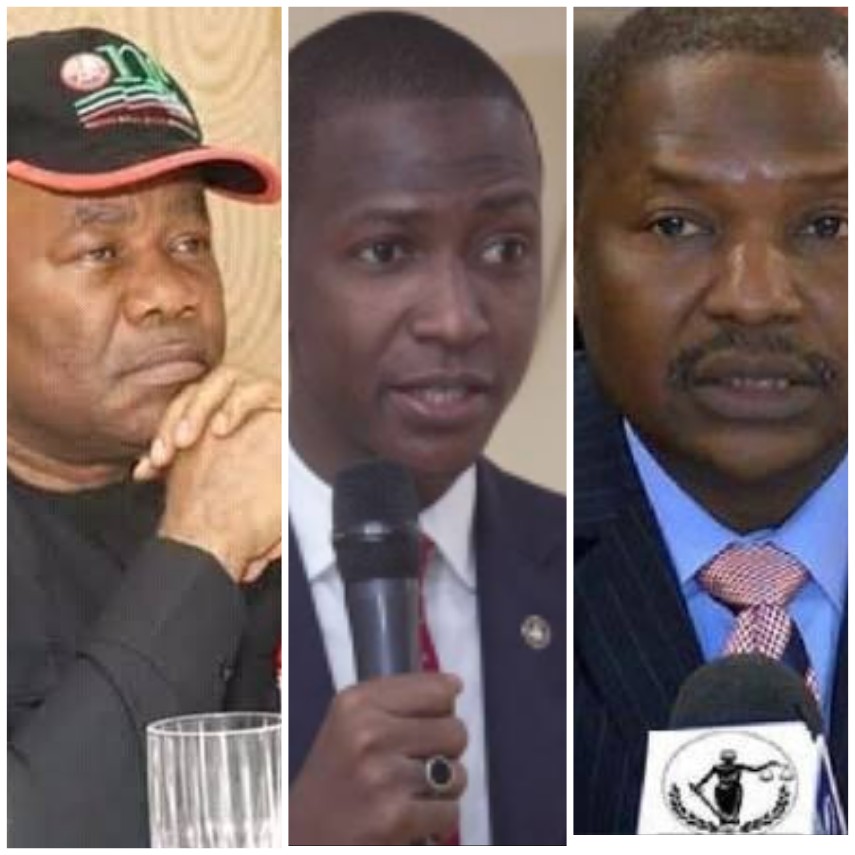 The Economic and Financial Crimes Commission has rubbished the report by Sahara Reporters which claimed that Sen. Godswill Akpabio, Minister of Niger Delta Affairs bribed its chairman Abdulrasheed Bawa with 350,000 dollars.

The anti-graft agency also clarified that Akpabio was not taken into custody as reported by an online newspaper.

EFCC’s spokesman, Anietie Ekong, said it was actually Akpabio who sought an audience with the EFCC to discuss issues surrounding the transfer of funds belonging to the Niger Delta Development Commission (NDDC).

Ekong made the clarification in Abuja on Saturday.

He said the article was fabricated and that there was no reason for the minister to bribe the EFCC boss as alleged.

He explained that on Wednesday, April 14, Akpabio sought an audience with the EFCC chairman to discuss the transfer of funds belonging to the Niger Delta Development Commission (NDDC).

This, he said, was in respect of the 3 percent statutory remittances from Oil and Gas Companies in the custody of the EFCC.

He said President Muhammadu Buhari had approved the transfer of monies earlier paid by the International Oil Companies into the CBN and EFCC accounts since December 2020.

“The EFCC chairman granted the request and the two officials met.

“They had a robust discussion and the minister received very intelligent and useful input from the EFCC chairman on the ongoing NDDC forensic audit.

“However, the discussion was inconclusive since the minister needed to attend a security meeting with select South-South and South-East leaders and governors at the office of the National Security Adviser on the same day,’’ he said.

The duo agreed to reconvene later on the same day to conclude their interaction and they did with the meeting wounding up after more than one hour.

Ekong stated that there was no issue of detention, adding that Akpabio could not have carried 350,000 dollars into the office of the EFCC chairman as he went there without a bag or a container.

He said the EFCC chairman gave useful and intelligent advice on the methodology of achieving success in the ongoing NDDC forensic audit.

He added that the minister also sought the cooperation of the EFCC to actualize recoveries of further 3 percent levies due to the NDDC but still being owed by some oil and gas companies.

Ekong also debunked the part of the online report that the meeting was arranged by the Attorney-General of the Federation, Abubakar Malami.

“For the umpteenth time, Akpabio did not bribe the Attorney-General with five million dollars as alleged to get Mr. Effiong Akwa elevated to the position of the Interim Administrator of the NDDC,’’ Ekong said.

He recalled that the appointment of Akwa was duly made by President Buhari in obedience to an ex-parte order of the Federal High Court, Abuja.

He explained that the court had restrained named members of the Interim Management of the NDDC from carrying out their duties until the application for an order of Mandamus was argued and disposed of.

“In that suit, the court had ordered that the headship of the NDDC be handed over to the most senior Director pending the conclusion of the suit.

“The most senior director at that time happened to be Akwa, who months earlier had replaced the deceased Executive Director of Finance and Administration, Chief Bassey Etang, who passed on in May 2020 after a brief illness,’’ he said.

Ekong added that the originators of the suit did not replace the deceased Etang with Akwa as a party in the suit, hence his emergence as the Interim Administrator.

He expressed dismay at the dragging of Malami’s office and name into the appointment of NDDC interim administrator that was clearly a child of circumstance.

Ekong expressed hope that his explanations would disabuse the minds of the general public against the falsehood peddled by the authors of the false and malicious publication.

He advised the general public to discountenance the said publication, adding that it was propelled by persons whose stock in trade was politics of blackmail.