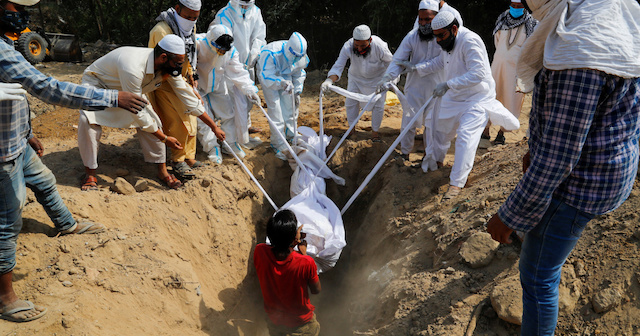 India broke another world grim COVID-19 record on Friday when it recorded an unprecedented daily cases of 346,786 and 2624 deaths.

The COVID-19 crisis, sweeping through the country has strained everything from availability of oxygen supplies and hospital beds.

News agencies reported critical COVID-19 patients not being able to secure ICU beds, with some dying on trolleys even before doctors attended to them.

Delhi’s Jaipur Golden Hospital, Saroj Hospital and Batra Hospital and others have all reported oxygen shortage.

SL Gupta, a doctor at Batra Hospital, Delhi said his hospital needed 8000 litres of oxygen per day, but only has 500 litres in 12 hours for 350 patients.

“Now tell me how we treat patients”, he said.

Narayan, a father of five children is one of the latest casualties of the second wave of the coronavirus in India.

According to Reuters, his brothers had first brought him to the hospital at 6 a.m. on Friday. But they said staff deemed him well enough to return home.

Ten hours later, his condition deteriorating, they came back. But it was too late to save him.

“The system is broken,” his younger brother Raj said.

Narayan died without being admitted to the hospital, or taken to its morgue, meaning his death is unlikely to be officially counted in the city’s rising toll.

Guru Teg Bahadur Hospital, in the northeast of India’s capital, is one of many battling oxygen shortages and a lack of space.

“Due to an exponential rise in COVID-19 cases in Delhi, all the hospitals are over-burdened,” a Delhi government spokesman said.

“In GTB Hospital, the patients are arriving via ambulances despite unavailability of beds. Despite this, the government is trying its best to give all patients treatment at some facility or the other.”

Despite the lack of beds, many feel they have little choice than to turn up after being denied entry to other overburdened COVID hospitals, pleading with staff to admit their loved ones.

Currently, an online dashboard indicates just 22 ICU beds are available in Delhi out of more than 4,500.

“We have been roaming around for three days searching for a bed,” said a man who gave his name as Irfan, whose wife sat immobile on the pavement.

The government has deployed military planes and trains to get oxygen from the far corners of the country to Delhi.

Television showed an oxygen truck arriving at Delhi’s Batra hospital after it issued an SOS saying it had 90 minutes of oxygen left for its 260 patients.

“Please help us get oxygen, there will be a tragedy here,” Delhi Chief Minister Arvind Kejriwal appealed to Prime Minister Narendra Modi in a conference on Friday.

The crisis is also being felt in other parts of the country, with several hospitals issuing public notices that they don’t have medical oxygen. Local media reported fresh cases of people dying in the cities of Jaipur and Amritsar for lack of the gas.

The Indian government had declared it had beaten back the coronavirus in February when new cases fell to all time lows.

However, COVID-19 deaths across India rose by 2,624 over the past 24 hours, the highest daily rate for the country so far.

Crematoriums across Delhi said they were full up and asked grieving families to wait.