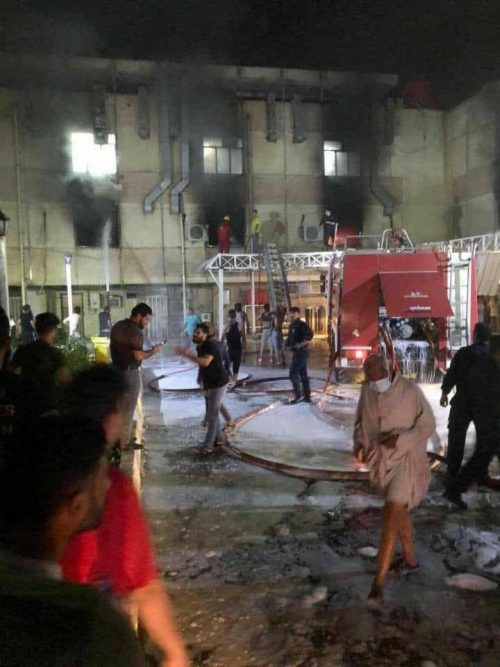 Eighty-two people died and 110 were injured at a Baghdad hospital that had been equipped to house COVID-19 patients, an Interior Ministry spokesman said on Sunday.

“We urgently need to review safety measures at all hospitals to prevent such a painful incident from happening in future,” spokesman Khalid al-Muhanna told state television, while updating the toll.

The fire erupted on Saturday night at the Ibn Khatib hospital in the Diyala Bridge area.

It was sparked off by an oxygen tank explosion.

Ali Bayati, a member of Iraq’s semi-official High Commission for Human Rights, had said earlier a final death toll had not yet been officially announced but it could be between 30 to 45.

Patients’ relatives scrambled during the blaze to save their loved ones.

A man who had been visiting his brother described people jumping out of windows to escape.

“The fire spread, like fuel … I took my brother out to the street, next to the checkpoint. Then I came (back) and went up from there. To the last floor, that did not burn.

“I took her on my shoulders and I ran down. People were jumping… Doctors fell on the cars. Everyone was jumping. And I kept going up from there, got people and come down again,” Zaki said.