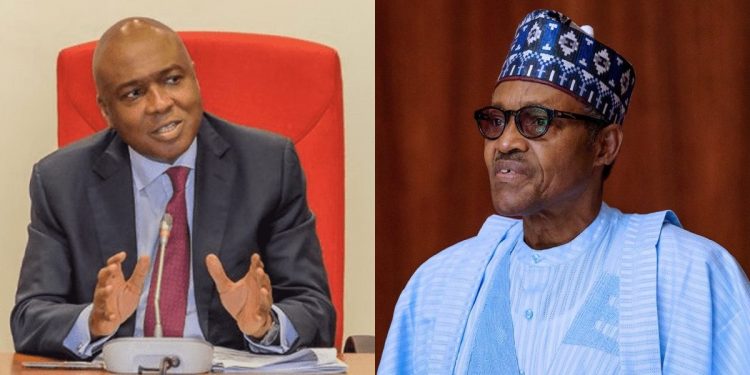 He said it was clear that Buhari and the APC had been overwhelmed by the situation at hand and needed urgent help.

Saraki, in a statement lamented that on Monday, Nigeria experienced one of the saddest days in recent memory.

“All in one day, from Anambra State to Kaduna, Yobe, Niger, and Lagos States, critical insecurity issues were recorded and reported. Hour after hour; breaking news after breaking news, we saw numerous unacceptable reports of violence, kidnapping, terrorism, and the systematic breakdown of law and order in many parts of the nation. This should not be so.

“We read reports of Boko Haram hoisting up its flag in Niger State, in Shiroro LGA that houses one of Nigeria’s largest power stations — and is just about 200 kilometres from our federal capital.

“We also read the statement of the Niger State governor, where he expressed how helpless the government has become, and how thousands of people have been displaced in his state. He also lamented how the efforts of the federal government have not yielded concrete results.

“We also received sad and disturbing reports that Mainok, a town on the Damaturu-Maiduguri highway was invaded on Sunday by the insurgents who unabashedly went on a killing spree — targeting our brave soldiers and innocent civilians alike. Nine people were said to have been killed by hoodlums that invaded Ukpomachi Village, Awkuzu in Oyi LGA of Anambra State.

“In Kaduna State, two more innocent students that were kidnapped from Greenfield University were killed by their abductors. While, an unspecified number of students have now been abducted from the Federal University of Agriculture, Makurdi, in Benue State. All in one day. All within a 24-hour news cycle. This cannot continue. This cannot become Nigeria’s new normal,”  Saraki said.

According to Saraki, “it is obvious that President Muhammadu Buhari and the All Progressives Congress (APC) government need help. They have been overwhelmed by the situation and they sure need assistance from all.

“Thus, I urge Mr. President to seek help wherever it can be given. This matter has gone beyond what the government can handle alone. The President should know that calling for help in our present situation is not a sign of weakness.

“Just as I stated in my press statement on the same issue on January 24, 2021, I want to reiterate that the President needs to bring together all former Presidents and heads of state, serving and former chief justices, serving and former presiding officers of the National Assembly, serving and former heads of security agencies, traditional rulers with relevant experience, leaders of the private sector, development partners, friends of Nigeria in the international community and all others who can help in finding solutions to the problem at hand.”

He said the meeting must hold expeditiously and must be followed by immediate actions, saying that he knew there were many people who believed that the fact that this suggestion is coming from a source outside government was a good reason for the President to ignore it.

“I think the attitude this time around must be different. This is definitely not a time for partisanship or for people to play politics with the lives of the citizenry and the future of the country.

“Security of lives and properties is the first and most important duty of government and it must be taken seriously. My suggestion here is an appeal made out of genuine concern with what is going on in our dear country.

“More importantly, in the democracy that we practice, the institution charged with holding the executive accountable is the legislature. In this regard, I strongly call on my colleagues in the National Assembly to be more assertive in finding solutions to this issue of insecurity.

“l need to make it clear that they will not be helping the administration if they do not become more insistent and decisive in their approach to getting this security crisis tackled immediately. Doing this cannot be logically interpreted as antagonising the executive,” he added.

According to Saraki, just as treating the issue in a mild manner did not amount to co-operation and that they must stand up and put Nigeria first before any other consideration.

He said it was by doing this that they could genuinely help both the government and their constituents.

Saraki stated that the leaders of the ruling party, the All Progressives Congress (APC) also have a vital role to play.

“They must do all that is necessary to help the administration to get solutions to this national crisis. This is a time for them to be part of the search for the solution and getting the government to act swiftly in implementing good ideas that will return the country to normalcy and the path of genuine development.

“Even those of us in the opposition party recognise the fact we can only exist if we continue to have a country. Thus, we are willing to cooperate with the government in finding solutions to this problem.

“Our former leaders, I am sure, are ready, willing, and able to assist the government with their wealth of experience. With their active role in combating the COVID-19 crisis, even the private sector has shown that if called upon, at any time and on any issue, it is ready to help solve this crisis.

“Our friends in the international community, have also demonstrated their willingness to help us out. However, all these actors will not jump into the arena without the government facilitating their intervention. The government needs to call on them before this problem consumes all of us,” he said.

“At this point, words and press statements are not enough. We need to see action. I appeal to Mr. President to take the bull by the horn. He should act to stem the tide of this violence threatening to tear the country apart,” he added.