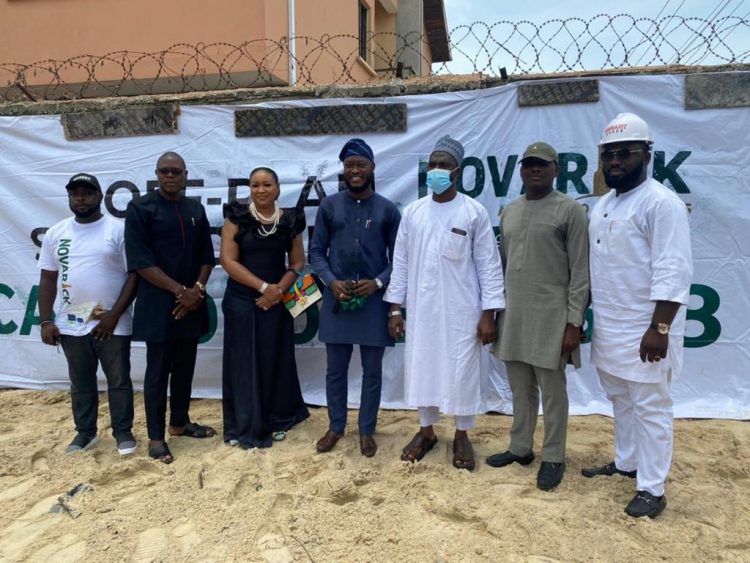 Chief Executive Officer, Noah Ibrahim and others at the groundbreaking ceremony

This is coming barely one year after the successful launch of its premiere housing project, Ruby Apartment One in Ologolo community, Lekki.

The Groundbreaking ceremony held on site at the project ground was graced by the Queen of Ilara, Epe, Olori Bolanle Yetunde Ogunsanwo, Chief Imam of Lekki Central Mosque, and a Non-Executive Director of Novarick Homes, Mr. Otonye Lolomari amongst other delegates.

The Chief Executive Officer, Noah Ibrahim, who also celebrated his 29th Birthday the same day, stated that the ruby project is set to transform the housing markets, drive sustainable developments, and provide a viable investment opportunity for investors.

He added that the success recorded in the construction of Ruby One is proof that the company is committed to its goal to continue building affordable and sustainable homes to meet the housing demand and deliver long-term investment.

“Our mission remains providing affordable homes that improve the standard of living of the common Nigerian and a sustainable environment for people to dwell. We started Ruby One with this single dream and we have witnessed it gradually take shape in becoming reality, but we aren’t stopping there.

“Today we are launching Ruby 2 and Ruby 3, tomorrow by the grace of God we will launch Ruby 4 and Ruby 5. The current housing deficit is 700,000 units annually, our goal at Novarick Homes is to deliver at least 0.1% of that number annually” Ibrahim announced.

Both properties are situated in the Ologolo community, Lekki, Lagos State, and are easily accessible from any part of the state using Google Maps. The projects are about 10 minutes drive from the popular Lekki Phase 1 and less than 5 minutes from Circle Mall, Elegushi Beach, Chevron, First City Hospital, and FilmHouse Cinema within the Lekki Peninsula.