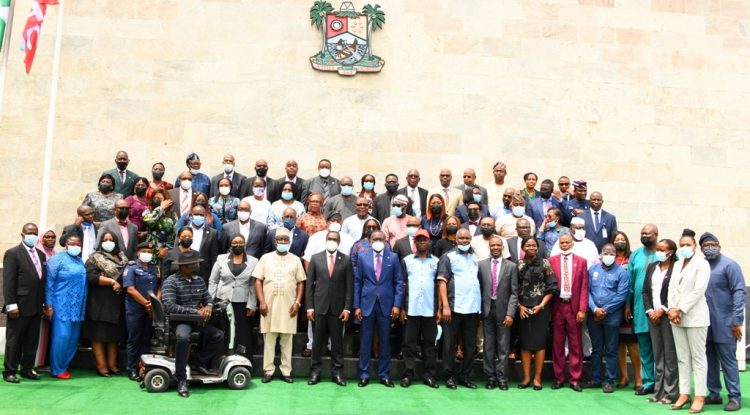 Lagos State Governor, Mr. Babajide Sanwo-Olu has tasked heads of parastatals in the State on quality performance, urging them to work tirelessly as a team to make Lagos better than the way they met it.

Sanwo-Olu implored the State’s personnel to work as a team to deliver good governance and dividends of democracy to citizens of Lagos State, who they are appointed to serve in different capacities as heads of government agencies.

Speaking during a meeting with Chief Executive Officers of parastatals at the Lagos House, Ikeja on Tuesday, Governor Sanwo-Olu said they have crucial roles to play in Lagos project and therefore urged them not to rest on their oars until the greater Lagos is achieved.

“You must work as a team because you all have a role to play in good governance in Lagos State. The citizens are looking at us. There is a trophy to be earned. There is a medal to take away. There are people that truly believe that we can make their lives a lot better. Let us make Lagos better than how you met it. We must go out to do it and not disappoint them. If we work together, there is nothing we cannot achieve as a state,” he said.

Speaking at the event, Lagos State Deputy Governor, Dr. Obafemi Hamzat, said the vision in Lagos is to make Lagos Africa’s model mega city, a global economy and financial hub that is safe and secure.

He therefore advised heads of parastatals in the State to relate with one another in order to succeed, adding that they must all scale up their activities in their respective agencies by springing up to their responsibilities.

The Guest Speaker encouraged the state government to create more avenues to improve sports activities in the State by establishing Lagos Sports Special School and Lagos State Hall of Fame.

He said the Lagos Sports Special School will help in producing more talents in the sports industry while the Lagos Hall of Fame will encourage younger generations to go into sports owing largely to the State Government recognition of those who have made positive impact through Sports in Lagos.

In his welcome address, the Special Adviser, Parastatals Monitoring Office (PMO), Mr. Afolabi Ayantayo, said the office is to promote good governance and therefore urged heads of the parastatals to work toward a better Lagos in line with the THEMES developmental agenda of the Babajide Sanwo-Olu administration.

Ayantayo said PMO was established in 1986 to manage government parastatals but was upgraded to a ministry under the Asiwaju Bola Ahmed Tinubu led administration.