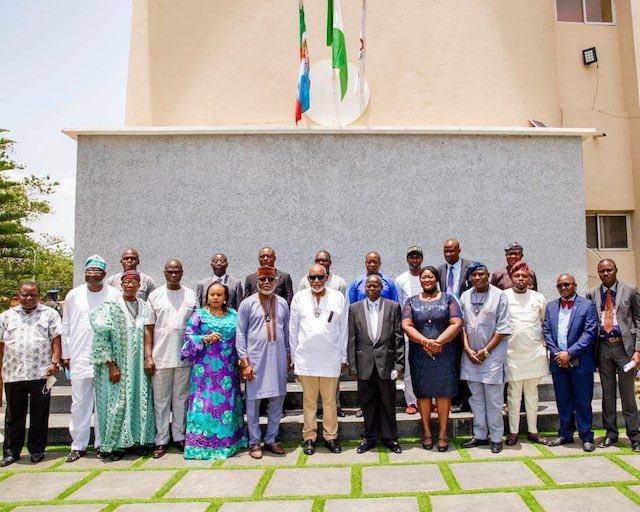 Akeredolu, centre, with members of the Ondo Judicial panel on #EndSARS

The Ondo State Judicial Panel of Inquiry on Police brutality and other related matters has recommended the payment of about N755 million as compensation to petitioners and other claimants.

The Chairman of the nine-man Panel, retired Justice Salisu Sidiq, stated this in his address while submitting the Committee’s reports and recommendations to Gov. Oluwarotimi Akeredolu in his office on Wednesday in Akure.

The Judicial Panel was inaugurated by Akeredolu on Oct. 20, 2020 to address issues that led to #Endsars protest.

Sidiq said it received and heard 77 petitions out of which 14 were criminal and 63 were civil matters.

He said that the committee also recommended publication of apologies in national dailies, particularly, where reputation of victims had been tarnished.

“Mr Governor Sir, the Panel, after careful consideration of its limitations in line with extant Supreme Court judgments on the powers of Panels of Inquiry to entertain res-judicata cases I suggest that it is high time a review is carried out on Section 84 of the Sheriffs and Civil Process Act, (2004) to enable judgment creditors enjoy the fruit of their litigations

“On the issue of vandalised property, the panel, after various visits to the ‘locus in quos’, observed that four out of the 18 local government areas, namely: Akure South, Ondo west, Odigbo and Okitipupa were affected during the #Endsars protests,” he said.

Akeredolu noted that human rights violation was one of the problems the country was facing.

The governor, who noted that things were getting worse regarding security and banditry, promised to look at the recommendations and do the needful.

Akeredolu described the #Endsars protest as legitimate against police brutality in the country until it was hijacked by hoodlums that started stealing and destroying property.

“No one can convince me that the organisers of the #EndSars protest were behind the destruction of property in Akure South, Ondo West, Odigbo and Okitipupa.

“Setting my campaign office on fire could not have been #Endsars because, obviously, I am not a police officer.

“Also, setting the APC secretariat and the PDP secretariat on fire could not have been #EndSars,” Akeredolu noted.