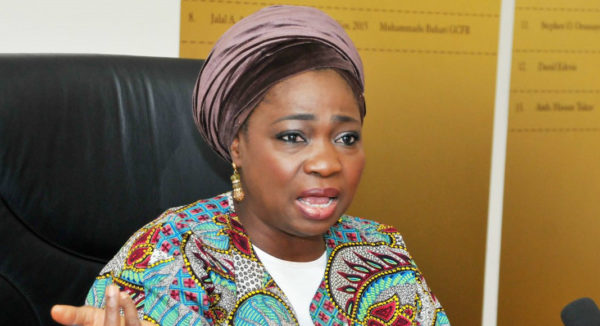 The chairman of the Nigerians in Diaspora Commission (NIDCOM), Abike Dabiri-Arewa has reacted to the sexual assault allegations levied against Nollywood actor Olarenwaju James popularly known as Baba Ijesha.

Baba Ijesha was arrested some days back for molesting a minor. He reportedly confessed to his crimes.

In a tweet on Thursday, Dabiri lambasted Baba Ijesha, dismissing his plea for mercy in a now-viral video where he confessed to the crime.

According to the former lawmaker at the lower chamber of the National Assembly, the case would earn him no less than 14 years imprisonment.

She urged Nigerians to disregard the actor’s plea for mercy, while also calling on the relevant instruments of justice to ensure that maximum sentence is passed.

“So despicable! The act by Yoruba actor, Baba Ijesha, who defied a girl, at 7 years and later at 14 years! Who knows how many the pedophile could have damaged if he wasn’t caught,” Dabiri wrote.

“I sponsored the violence against person’s law. The penalty is nothing less than 14 years in prison. His plea, begging on some video I watched should not be acceptable.

“We should all do all we can to support the girl’s foster mother, Princess, to ensure this case goes to court and fully tried, and maximum sentence passed on him,” she added.

His plea begging on some video I watched should not be acceptable. We should all do all we can to support the girl’s Foster mother, Princess, to ensure this case goes to court and fully tried , and maximum sentence passed on him.

A police source had said the ongoing strike by the Judicial Staff Union of Nigeria (JUSUN) has prevented Baba Ijesha’s case from going to court and the suspect cannot be detained indefinitely without trial.

The source added that investigation into the allegation against Baba Ijesha revealed that there was no defilement, adding that when questioned, the victim confirmed the same.

Following the development, several Nigerians faulted the law, insisting that Baba Ijesha’s own admission of the crime was enough to make him face the full consequences of his crime.

Iyabo Ojo, who has since led the charge for Baba’s conviction, together with other concerned Nigerians on Thursday, April 29, 2021, charged down the gates of the Panti Police Division in Yaba.

The actress threatened to rain fire and brimstone should Baba be released due to any form of legal technicality.