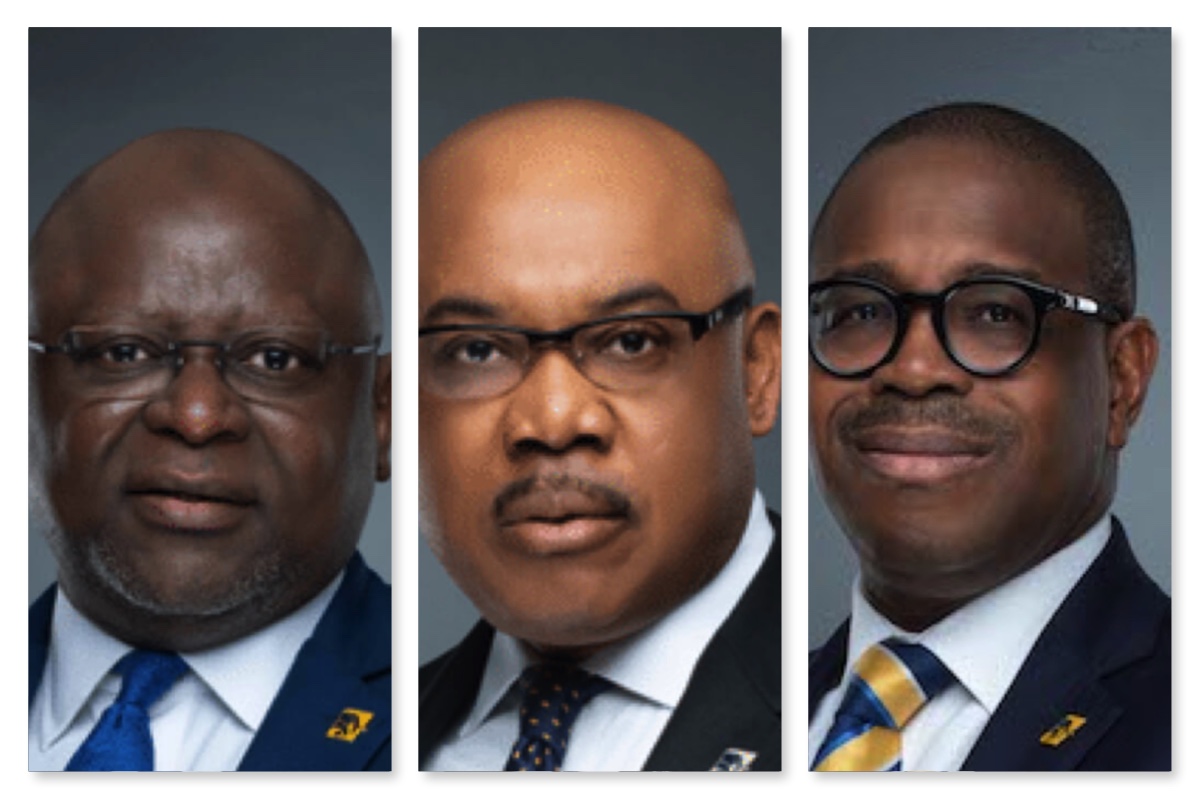 U.K. Eke, managing director of First Bank Holdings and Adesola Adeduntan, the prematurely retired CEO of the bank have all survived the CBN axe.

Adeduntan’s would be successor, Gbenga Shobo also survived, downgraded to his position as deputy managing director.

All the other members of the two boards were all removed by the apex bank, exercising its wide power under the BOFIA act.

The decisive action followed the announcement on Wednesday by Ibukun Awosika of the appointment of Gbenga Shobo as the bank’s CEO, when Adeduntan still has eight months left to finish his tenure.

The CBN queried the boards for the appointment, without its regulatory approval.

Apparently not satisfied with the response, the CBN followed up with the sack of the leaders of the two boards.

The new chairman for the holding company is Remi Babalola, with U.K. Eke retaining his post as managing director.

CBN Governor, Godwin Emefiele announced the sack in Abuja, in line with its powers under BOFIA 2020 while also revealing a past can of worms in the bank, which the Adeduntan regime, was trying to make healthy again.

He said the action was necessary to preserve the stability of the bank, so as to protect minority shareholders and depositors.

Emefiele said the bank had maintained healthy operations up until 2016 financial year when the CBN’s target examination revealed that the bank was in grave financial condition with its capital adequacy ratio (CAR) and non-performing loans ratio (NPL) substantially breaching acceptable prudential standards.

“The problems at the bank were attributed to bad credit decisions, significant and non-performing insider loans and poor corporate governance practices. The shareholders of the bank and FBN Holding Plc also lacked the capacity to recapitalize the bank to minimum requirements. These conclusions arose from various entreaties by the CBN to them to recapitalize.

“The CBN stepped in to stabilize the bank in its quest to maintain financial stability, especially given FBN’s systemic importance as enumerated earlier. Regulatory action taken by the CBN in this regard included: Change of management team under the CBN’s supervision with the appointment of a new Managing Director/ Chief Executive Officer in January 2016,” he said.

He said another action taken was grant of the regulatory forbearances to enable the bank to work out its non-performing loans through provision for write-off of at least N150b from its earning for four consecutive years, as well as grant of concession to insider borrower to restructure their non-performing credit facilities under very stringent conditions.

“Other actions taken included renewal of the forbearances on a yearly basis between 2016 and 2020 following thorough monitoring of progress towards exiting from the forbearance measures.

Emefiele stated that the measures had yielded the expected results as the financial condition of FBN improved progressively between 2016 when the forbearance was initially granted to the current financial year.

“For instance, profitability, liquidity and CAR improved whilst NPL reduced significantly. Notwithstanding the significant improvement in the bank’s financial condition with the positive trajectory of financial soundness indicators, the insider-related facilities remained problematic.

“The insiders who took loans in the bank, with controlling influence on the board of directors, failed to adhere to the terms for the restructuring of their credit facilities which contributed to the poor financial state of the bank.

“The CBN’s recent target examination as at December 31, 2020 revealed that insider loans were materially non-compliant with restructuring terms (e.g. non-perfection of lien on shares/collateral arrangements) for over 3 years despite several regulatory reminders. The bank has not also divested its non-permissible holdings in non-financial entities in line with regulatory directives,” he said.