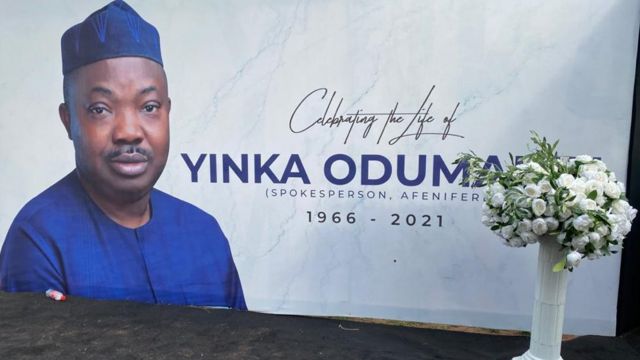 Civil Societies in Nigeria have appreciated the governor of Lagos State, Mr Babajide Sanwo-Olu and his counterparts from Ekiti and Osun.

They were appreciated for their contribution towards the successful burial of Comrade Yinka Odumakin, former spokesperson of Afenifere who recently died.

The Civil Society and Pro-Democracy Movement Memorial Committee for the burial of Yinka Odumakin also applauded various donors towards the successful burial.

Mr Bamiji Awa, the Secretary of the Planning Committee, in a statement sent to PM News appreciated Govs. Babajide Sanwo-Olu (Lagos), Gboyega Oyetola (Osun) and Kayode Fayemi (Ekiti), the Ooni of Ife, Oba Adeyeye Ogunwusi, and others for moral and financial support.

“This is to publicly appreciate the cash donations of N5, 000, 000 apart from other items N2, 500, 000 and N1, 000, 000 from Governors Babajide Sanwo-Olu, Gboyega Oyetola and Kayode Fayemi of Lagos, Osun and Ekiti States respectively.

“The Lagos State Government donated a sum of N5, 000, 000; 3 Coaster Buses; 1 Ambulance and a siren with heavy security back – up towards the success of Solidarity Memorial initiated by Comrades, friends and Associates of Comrade Yinka Odumakin.

“All these are for celebration and immortalisation of the life and legacies of the departed as announced by the Civil Society Organisation and Pro-Democracy Movement for Yinka Odumakin memorial,” Awa said.

Awa applauded the Ooni of Ife for a donation of African Village for fraternal solidarity, Night Musical Gyration, and tributes as well as reservation of 10 Executive Rooms within Ife Grand Resorts.

“Outright donation of Oduduwa Hall by the Authority of Obafemi Awolowo University, Ile – Ife, Osun State, for the Tributes’session held on Friday, 23rd April 2021 is commendable.

“We hopelessly knocked at your door in time of need and you gladly opened it as a refuge for us. We are indeed overwhelmed by your rare show of love and magnanimity.

“We say a big thank you. We wish you all long life and prosperity. Your generation will never lack. May God Almighty reward you all abundantly,” Awa prayed for donors.

The late Odunmakin was buried in his country home, Moro, Osun State on April 24 amidst glowing tributes.