May Day: Makinde lauds Oyo workers for progress so far 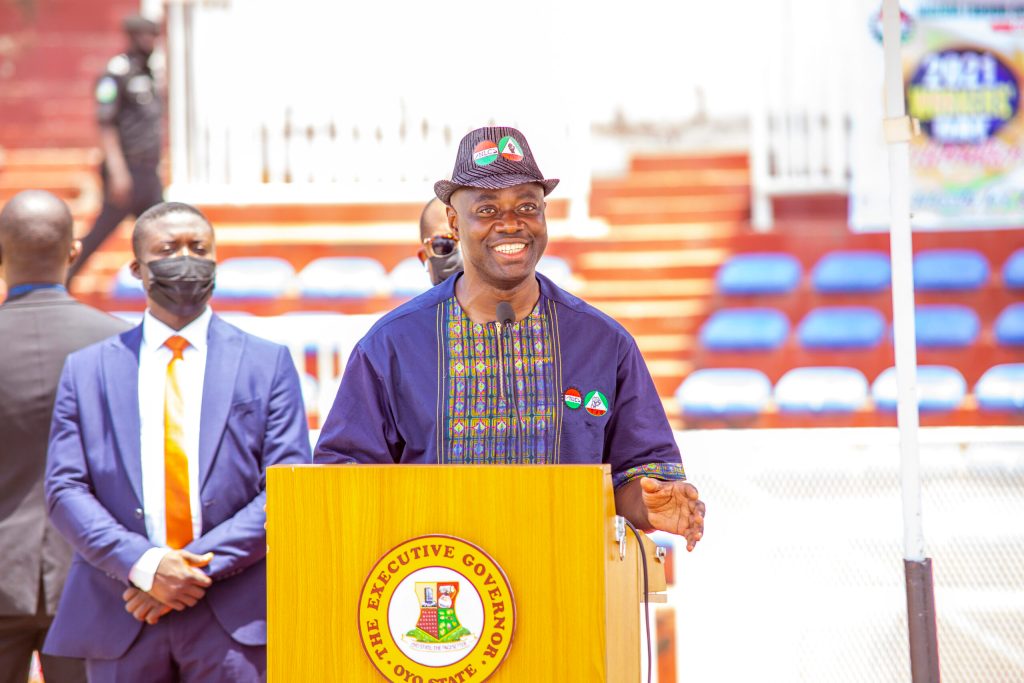 Governor Seyi Makinde of Oyo State on Saturday, lauded both private and government workers in the state, for their unflinching support.

Makinde, also thanked workers in the state for their contributions towards the economic growth of the state.

The governor while speaking at the May Day celebration, held at the Obafemi Awolowo Stadium, Ibadan, acknowledged the dedication and commitment of the workers, saying that the success recorded in the state in the last two years would not have been possible if not for the positive attitude of the workers.

“It has been a year already. And what a year it has been? Last year, when we celebrated Workers Day, we could not gather together because we were amid a pandemic.

“This year, the situation has not really changed, yet, it has also changed in many ways. Today, we see a consistent decline in the numbers of COVID-19 infections. For this reason, we can gather for the workers’ parade with appropriate protocols in place.

“It might not be as elaborate as we would want it to be, but we thank God that we can celebrate. We have had a rewarding year. And we have only you – the great workers of Oyo State – to thank for it,” he said.

Makinde noted that all workers, including artisans, business owners, corporate bodies and other workers operating in the state impacted positively on the steady economic growth of the state.

He stated: “We celebrate you because the economy of Oyo State is built on your efforts. “Never ever imagine that your contribution is too small. Never ever think that your efforts go unnoticed. When the National Bureau of Statistics (NBS) presents its periodic scorecards, we know that our economy is thriving not just because of foreign investments but also because of our local investors.

“For example, we were in the top three states with the highest full-year IGR growth rate. In the 2020 NBS report, our Internally Generated Revenue grew by 42.23%. You, the workers in Oyo State, are our biggest investors.

“Everyone, from the civil servants who open the gate to the secretariat every morning and shut them at the close of day; the Directors-General who manage agencies; the clerks who make entries in files; the aides who follow up on requests; the entrepreneurs running businesses in various sectors; the market men and women in Alesinloye Market; the shoemaker at the street corner; the farmer in Oke-Ogun – we all are doing something to make Oyo State great, and I thank you for your contributions.

“When I spoke to you last year, I gave you my word that no worker in the Oyo State Civil or public service will be paid with ‘bear with us’ at the end of any month. I am happy to report that we have kept that promise.

“While other states are paying their workers in percentages, we have consistently paid full salaries on the 25th of each month. And last December, we paid the 13th month salary for the second year running. We have been making prompt payment of pensions and clearing the backlog of gratuity payments we inherited.

“So far, we have paid over N13 billion in gratuities. We also have other measures to improve workers’ welfare in Oyo State, such as prompt approval of car and housing loans. We have also revisited the issue of civil servants who were denied promotions for the past five years. They have sat for their exams, and letters will be issued to successful candidates soon.”

Makinde who noted that the administration has been implementing policies that impact positively on civil servants in the state added that workers in the private and informal sectors have also been touched by the massive efforts the government has put into infrastructure and other key areas.

“However, we know that not every worker in Oyo State is a civil servant. So, while we are making every effort to keep civil servants happy and more efficient at work, we are also concerned about the individuals in the private sector.

“Therefore, in the past year, we have taken all necessary steps to turn around the economic fortunes of all residents of Oyo State. For example, we have invested massively in Infrastructure.

“People now make the joke that Oyo State is a massive construction site. The result is that we have cut down on travel time in some areas. If you were travelling from Ibadan to Saki, you would go through the newly constructed 65km Moniya-Ijaiye-Iseyin Road as we did last Christmas,” the governor said.

He also disclosed that the actualisation of the elongation of the directorate to grade level 17 had been approved by his administration.

He equally assured the state’s workforce that its welfare would continue to be the priority of his administration, even as he urged workers not to relent in doing what would enhance the development of the state.

“Last year, we used the agribusiness sector to drive our economic growth. We supported farmers for improved yields, collaborated with the private sector to improve processing capabilities, and even rehabilitated or resuscitated previously moribund industries.

“In the next year, we will be building on our expanded base and focus. We will be actively promoting investments in the solid minerals sector and tourism. We have already started speaking to investors in these sectors. By the time we present our next scorecard, you will be seeing the results,” Makinde stated.

Earlier, the state chairmen of the Nigeria Labour Congress (NLC) and Trade Union Congress (TUC), Kayode Martins, and Emmanuel Ogundiran, respectively, commended the Makinde administration over the prompt and regular payment of salaries, pension and gratuities.

Martins pleaded that the governor and his team should “intensify their efforts to curb the lingering insecurity and kidnapping that seem to have engulfed the entire country,” adding that “this will give confidence to all workers in all locations to go about their work without fear whatsoever.”

“Also, the casual staff at the state-owned media organisation – Broadcasting Corporation of Oyo State (BCOS) – that have spent up to five years and above should be employed into the mainstream with their vast knowledge,” he added.

In his remark, Ogundiran noted that Makinde has devoted himself to repositioning Oyo State “to where it can realistically be called the Pacesetter.”

According to him, the pronouncement of the elongation of Directorate in Oyo state to GL.17 and the gradual re-invigoration of the civil/public service through recruitment of new blood into the service, are among the giant strides of the Makinde’s administration.

He urged the labour unions in the state to continue to play their parts in moving the state and the country at large, forward.

Scores of labour unions in Oyo State, including Nigeria Union of Journalists, Association of Professional Tailors, Hair Dressers Association and Farmers Congress took part in the parade, while the governor took the salute to mark the celebration.