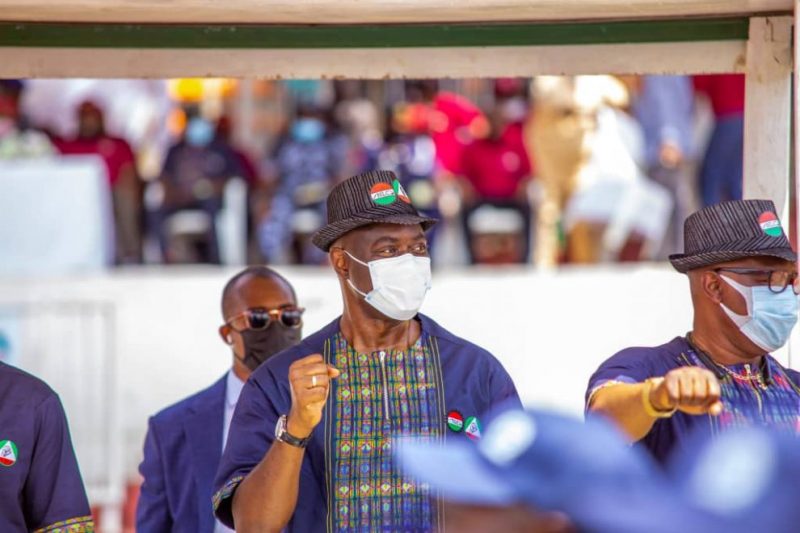 Governor Seyi Makinde at the 2021 May Day celebration in Oyo state.

Oyo State Chairman of the Nigeria Labor Congress (NLC), Mr Kayode Martins, has called on Governor Seyi Makinde to draft casual staff of the Broadcasting Corporation of Oyo State (BCOS) into the civil service of the state.

According to him, casual staffs of BCOS who have spent up to five years and above, should be included.

Mr Kayode Martins made this plea on Saturday at the celebration of this year’s Workers’ May Day festivities at the Obafemi Awolowo Stadium Oke-Ado, Ibadan, attended also by Governor Makinde and top officials in his administration.

According to Martins, ‘the casual staff that have spent up to five years and above should be employed into the stream with their vast knowledge. It will be unfair for the management of BCOS to train and lose the trained staff to other media organization.’

The NLC also appealed to Makinde to fully grant and implement judiciary and parliament autonomy, saying: ‘This will ever be a landmark accomplishment, which can never be earned all through generation and generation to come.

“We also appeal that the governor and his team intensify their efforts on the lingering insecurity and kidnapping that have seemed to engulf the entire country. This will give confidence to all workers in all locations to go about their work without any fear whatsoever.’

In his speech, Makinde stated that his administration has prioritized workers’ welfare since the outset of his tenure as the steward of the state about two years ago.

Makinde highlighted many of his developmental policies aimed at improving workers’ welfare.

These include the payment of over N13 billion in gratuity, prompt approval of housing and car loans, promotion of workers that have been stagnated for five years.

Also, the approval of opportunity for workers to rise to Grade Level 17, as well as pragmatic steps towards revamping of the economy of the state for all and sundry.

Chairman of Trade Union Congress (TUC) in Oyo, Emmanuel Ogundiran, noted that the ‘elongation of Directorate to Grade Level 17, which is yet to be actualized (as letters are yet to be given to deserving officers) has excluded technical officers and sub-officers, where grade terminates on Grade Level 14.

”You would do well to kindly direct that the elongation is extended to those categories of officers as well’ he added.