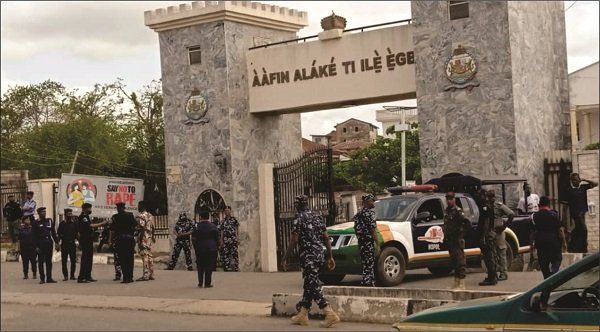 They were said to have been arrested at the Alake’s palace and taken to the state police headquarters, Eleweran, Abeokuta.

Scores of the Yoruba nation agitators staged a mass rally in the state capital, defying an order by the police against the rally.

The protesters marched through the streets with many of them taking a position in front of the Palace of the Alake of Egbaland, Oba Adedotun Gbadebo.

As the agitators caused serious gridlock on major roads, a police helicopter was sighted hovering over some areas.

Joint security operatives led by the Area Commander of Adatan, Ayo Edun, were also placed in strategic locations across the state.

It was later gathered that there was a clash between the agitators and the police at Eleweran when the secessionists invaded the place to demand the release of their members.

The arrested persons were thereafter released as ordered by the Commissioner of Police, Edward Ajogun.

Oyeyemi said the agitators attacked the police headquarters in the state and some policemen on duty.

He confirmed that eleven of them were earlier arrested for unruly behaviour at Alake’s palace and were later released on the order of the Commissioner of Police.

The PPRO, however, lamented that despite the release of their members, “they still went ahead to attack policemen at More Junction not far from the headquarters, after the attacks at Eleweran, Abeokuta.”

He said “We just woke up early in the morning and saw some group of people in front of the Alake’s palace conducting themselves in unruly manners. And don’t forget that one of them had issued a threat to the Alake before; so, our men went there to challenge them and they were unable to give a satisfactory answer.

“Eleven of them were arrested and the Commissioner of Police directed that they be released. We profiled, screened and released them. Despite the fact that we released them, these people still went as far as the Police Headquarters Eleweran to launch an attack on the police.

“Though we have already dispersed them, they still attacked our men at More junction. They attacked policemen who were on their lawful duty, they attacked them for just no reason.

“We are sounding a note of warning to them. They are trying to provoke law enforcement agents, they should be warned that we are holding our peace because we are following the rule of engagement and we don’t want to engage in an unnecessary show of force with some people.

“They should not take our civility for a licence for them to be attacking our men. It will no longer be tolerated.

“We are still collating the result of their unruly behaviours and I will make that one available soon.”