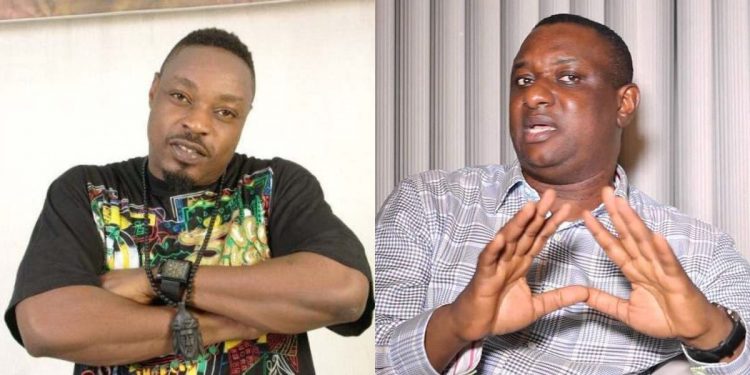 Eedris Abdulkareem hits back at Keyamo

“Senior Advocate of Nonsense” is currently trending on social media after Nigerian singer Eedris Abdulkareem dropped a follow-up diss song for Festus Keyamo, minister of state for labour and employment.

The diss track is a follow-up to ‘Jaga Jaga Reloaded’ which led to social media war between the duo who were once close.

The drama had started some weeks back after the musician accused the minister of ditching his characteristic activism after he joined the present government.

Mr Keyamo had held nothing back in counter-attacking Eedris, claiming the singer made a poor attempt at blackmailing him in his new song ‘Jaja Jaga Reloaded’.

The minister via his Twitter page on April 25 claimed Eedris once begged to be part of the Buhari Campaign Organisation which he directed in 2018.

According to the minister, Abdulkareem’s claim was informed by the singer’s disgruntlement after his request to join the media team in 2018 was rejected.

The minister also narrated how the musician begged him for money and pleaded for help to “get into the system.”

In his reaction, Abdulkareem replied that the cabal to which Keyamo belonged was in pain over his music release.

However, the singer dropped another hit for the minister, with a number of allegations.

The song also touches on the multiple reports of kidnappings across the nation.

“Keyamo, in 2018 when you got appointed, I thought you were still a comrade. I thought you could effect change in your government. That’s why I recorded ‘Obasanjo Write Buhari Letter’ to help you in that process,” he sang.

“Yes, a lot of people supported Buhari but we all regretted it. Keyamo, your government is full of propaganda. Nigeria is no longer safe. Kidnapping our children in their own schools. Blood flowing in our cities and villages.

Nigerians have also taken to social media to react to the latest development.

With this Eedris Jam. I doubt if festus keyamo will sleep in peace. ~
Where is the lie in the sentence “Senior Advocate of Nonsense”pic.twitter.com/SpzvgQaEg4

Bruhhh, can’t even lie the song sounds good. Eedris is really having a lot of fun with this.

Call Eedris abdulkareem names as you like but he was very right about Keyamo, was he not a Buhari critics in 2015/16? Same keyamo that was prosecuting Akpabio on behalf of EFCC is now dinning with Akpabio at the executive council today, he's indeed a senior advocate of Nonsense

Eedris abdulkareem will not kill somebody 🤣🤣🤣🤣… Mehnnn dis song was needed after a horrible day filled with bad news on dis app. Senior advocate of nonsense and rubbish 🤣🤣🤣🤣🤣🤣🤣… I just hope keyamo doesn't take Eedris to court ohhhh🤣🤣🤣🤣

Honestly, Eedris Abdulkareem is the only 9ja artist, apart from Fela Kuti, that is specific and direct in his songs.
Jaga-Jaga-Reloaded just warm up the guy, then Keyamo release receipts…Baba go chop plenty liver, con bounce back!! Ah..Senior Advocate of Nonsense…Mad ooh!!

The only way Festus Keyamo AKA Senior advocate of Nonsense can reply Eedris Abdulkareem now is to hit the studio too, aside that anything he says or write won't now carry weight !