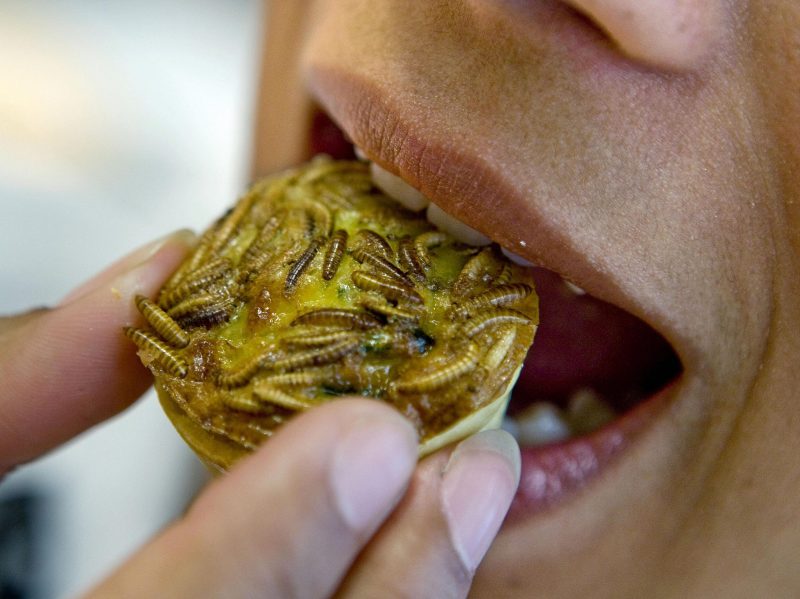 A woman takes a bite of a mealworm pie in the Hague, Netherlands.

The dried yellow mealworm has made history as the first insect to be granted EU authorisation as a novel foodstuff, the European Commission announced in a press release on Tuesday.

EU states gave the green light on Tuesday for the larva of the Tenebrio Molitor beetle to be eaten either whole or as an ingredient, for example by being ground up and added to pasta or biscuits.

“It is up to consumers to decide whether they want to eat insects or not,’’ the European Commission said in a web page explaining the decision.

“In many parts of the world, insects are an established food and protein source, the commission noted.’’

The decision comes after a positive safety evaluation by the European Food Safety Authority published earlier this year.

Novel foods are those that were not consumed in the European Union to a significant degree before May 1997.

The European Commission said it expects to give its final formal approval in the coming weeks.

Dried yellow mealworm can now be sold across the 27-nation bloc after a Monday decision from EU governments and a food safety assessment, the European Commission said on Tuesday.

EU officials suggest it could be used as a protein boost for cookies, pasta or baked goods, as they try to reassure fussy eaters that millions of people around the world already eat insects. It’s also a more environmentally friendly alternative to rearing cattle and other larger sources of protein.

The market for edible insects is set to reach 4.6 billion dollars by 2027, according to one report earlier this year.

Some 11 other insect foods are waiting for food safety evaluations from the EU.

“It is up to consumers to decide whether they want to eat insects or not,” the EU said on its web page.

“The use of insects as an alternate source of protein is not new.”