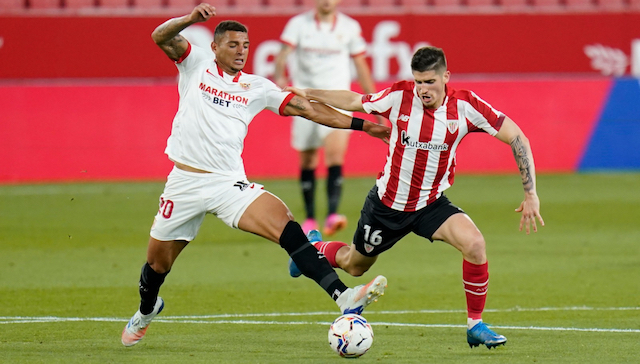 Sevilla suffered a huge blow to their Spanish La Liga title hopes on Monday after a 1-0 loss to Athletic Bilbao.

This was after Inaki Williams struck in the 90th minute to earn Athletic Bilbao a 1-0 win at the Ramon Sanchez Pizjuan.

Julen Lopetegui’s side, fourth on 70 points, could have closed the gap on leaders Atletico Madrid, on 76, and Real Madrid and Barcelona, on 74 each, with a victory.

Lucas Ocampos missed a good chance early on for the hosts, and Ivan Rakitic followed narrowly off target.

Unai Simon made a fine save to deny Youssef En-Nesyri as Sevilla continued to dominate but failed to find the breakthrough.

Ocampos had an overhead kick which deflected wide early in the second half.

En-Nesyri headed off target as their desperation for a winner grew, and it played into Athletic’s hands.

Williams broke away in the final minute of the game and finished brilliantly for his sixth goal of the league season, to secure three points for Athletic Bilbao, ninth