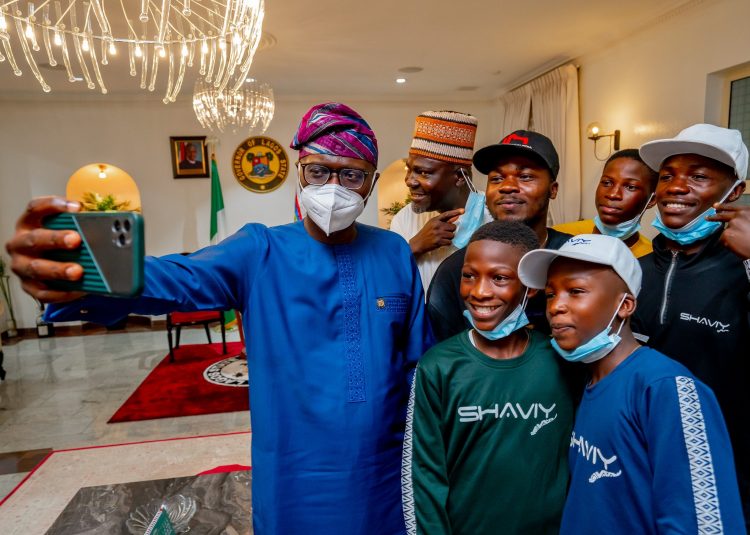 The year 2020 was great for Ikorodu Bois and 2021 is even getting better for the comic group who continues to receive international recognition.

The Governor of Lagos State BabaJide Sanwo-Olu played host to the comic group on Monday.

He said the young boys’ creativity put them and Ikorodu on the world map.

The Governor tweeted, “Today, I welcomed generational film-making talent @IkoroduB, whose creativity has put them and Ikorodu on the global map of international platforms like Netflix, earned them a nomination at the Nickelodeon Kids Choice Awards and put their faces on billboards in Times Square, NY.

“As a state, we are proud of them and I thank them for visiting me today. We are committed to developing creative talent in Lagos as we continue to serve as the premier destination for musical, art and creative talent generation in Africa.”

Recently, Hollywood director, Zack Snyder, also had a virtual video where he made it known that he loves the Ikorodu Bois’ remake of his movie trailer, Army of the Dead.

Last year, the Ikorodu Bois drew the attention of the producers of the movie, Russo Brothers, following the remake of the movie trailer, Extraction.

After watching their remake, in a tweet, the Russo Brothers expressed excitement at the remake and invited the trio to the world premiere of their Netflix action film sequel.

Also, Netflix — a US media service and streaming giant — enlisted Ikorodu Bois for its campaign to mark this year’s edition of the Oscars.

Moreso, the skit makers were nominated for the Favourite African Social Media Star’ category at the 2021 Nickelodeon’s Kids’ Choice Awards. However, they lost out to Nigerian comedienne, Emmanuella.