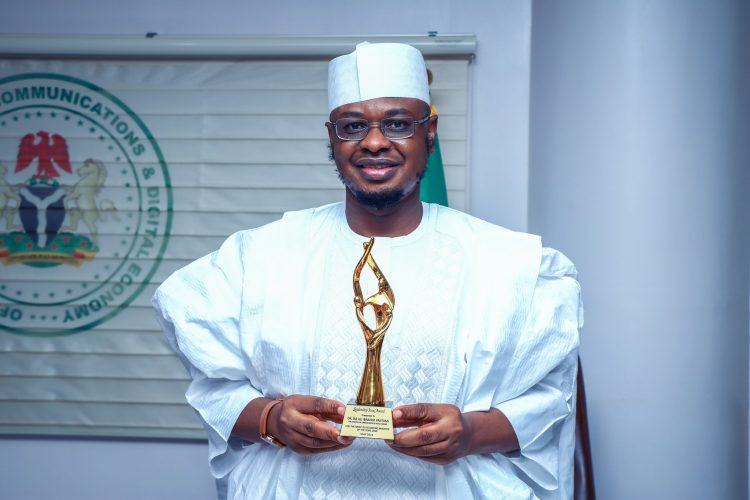 The Minister of Communications and Digital Economy, Isa Pantami, earned double honours in 48 hours as ‘The most outstanding minister of the year”.

On Thursday, the People and Power Magazine presented the minister with the first award. Twenty-four hours after the Elite Exclusive Magazine followed on Friday.

The latter said it arrived at the minister’s choice following what it called an independent online poll.

It presented a Certificate of Nomination and a plaque to the minister in his office today and said the Award will be presented on a later date.

On its own part, the People and Power Magazine said it honoured the minister based on laudable policies developed by the Ministry under the supervision of the Minister.

Cited are the NIN–SIM Data linkage, the National Digital Economy Policy & Strategy for a #DigitalNigeria and others

The Federal Ministry of Communication and Digital Technology, tweeted the two awards.

The accolade according to the magazine is in recognition of the laudable policies developed by the Ministry under the supervision of the Minister such as the revolutionary NIN–SIM Data linkage, the National Digital Economy Policy & Strategy for a #DigitalNigeria, among others. pic.twitter.com/c7sxD2laTm

The Honourable Minister of Communications and Digital Economy, @DrIsaPantami has been identified as the MOST OUTSTANDING MINISTER in an independent online poll conducted by Elite Exclusive Magazine. pic.twitter.com/N8526nCFAs

Isa Pantami was under fire recently over allegations of having ties with terrorist groups, such as Boko Haram and ISIS.

Several civil society groups and individuals called for his resignation or sack.

The Federal Government, however, defended the minister.

The senate even waded in and said Pantami is qualified to contest for elections in Nigeria despite allegations of terrorism.