Why life in America is scary 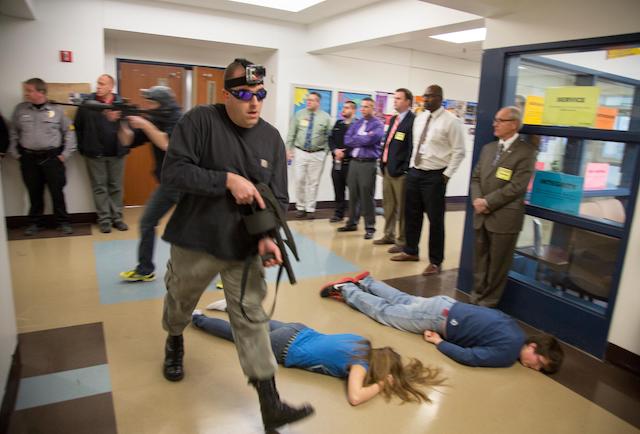 Active shooter drill in a school in America

I have a friend who moved from America to Europe for graduate school. And there she settled, in a European metropolis. She found a a good job, worked her way up, started a family. Things were good, and she was happy. One day, she got a job offer. From an American company. She’d have to relocate back to the States. They’d double her salary though — and offer her generous, world-class benefits that’d take care of the whole family.

She was torn. She pondered. More money. A growing family. Was it worth it? I asked her what decision she’d reached, one day, and she said: “I couldn’t do it. To the family.” Do what, I wondered. “American life,” she said, her voice heavy, “is just too scary.”

Americans don’t quite know it — though they feel it intimately, on a daily basis. American life is really scary. In a way that’s not remotely normal. In a way it isn’t in other countries — even poorer ones. In a way it shouldn’t be. Life isn’t scary like is in America anywhere, really, except in failed states.

Here are some of the things Americans have to live through, just as a consequence of being America. Their kids get shot at schools — when they’re not pretending to die in “active shooter drills.” You can lose a job — and lose healthcare for a critically ill loved one. You can have to choose between healthcare and rent or the mortgage, or education and your life savings, or all of them together. Make one tiny, tiny misstep, or face one ill-fated emergency — and bang! There goes everything. And when I say everything, I mean everything.

Here are some of the things Americans have to live through, just as a consequence of being America. Their kids get shot at schools — when they’re not pretending to die in “active shooter drills.” You can lose a job — and lose healthcare for a critically ill loved one. You can have to choose between healthcare and rent or the mortgage, or education and your life savings, or all of them together.

Think of the 26 year old who died because he couldn’t afford insulin. When that story was told, in a recent video, to people from around the world, many began to cry.

To cry. What does that tell you? To them, it’s totally abnormal. To live that way. We don’t cry unless we are afraid, distressed, frightened. Just the prospect of everyday American life — its grim, bitter realities — reduces people to tears.

Why did the idea that a 26 year old died because he couldn’t afford insulin — in the world’s richest country — make people cry? Well, a better question is: why doesn’t it make every American cry? The reason is straightforward: here is a young man, presumably full of potential, hopes, dreams, wishes, life…whose life was taken for no reason at all. If it can happen to him, it can happen, more or less, to anyone. That is frightening. It’s nightmarish and horrific, in a visceral and dumbfounding way. Is this the Middle Ages? Can a life really be taken just like that? For a lack of basic medicine?

In America, the answer is yes, and that answer is terrifying. Because that idea is all the things fear is made of. Dehumanization. A lack of dignity. The violation of the body. The dispossession of one’s humanity. The idea that one has no inherent or intrinsic worth. And so is at the mercy of malign forces who are totally indifferent if one lives or dies. That if one cannot please or placate these forces, they can take your life, in any way they wish, really — and bang, that’s the end.

American life is a massive, constant trigger of existential anxiety and dread. Am I going to survive today? This month? This year? What if there’s an emergency? What if I get ill? What if my kids get shot at school? Will I just…die?

If you’re not afraid of that, my friend…well, then you might be American.
You might pretend not to be afraid of all that, like many Americans are. You might be able to build mighty defence mechanisms. Like the ones Americans resort to. Worshipping billionaires. Becoming addicted to dumb celebrity gossip. Perfecting that filler face or perfect pecs for Instagram. Dumb super-hero movies, part 47 billion. Escapism like there was no tomorrow. Because it’s better not to think about it, since there might not be.

Americans are notorious for their infantile narcissistic psychology. The American Idiot is a legendary figure — the one running away from life, into stocks, money, big cars, video games, comic books, superhero movies, internet hate, boob jobs, plastic smiles, an endless list. This is obsessive compulsive, manic escapism. Take escapism away from an American — and they will react very, very badly. They’ll get mad, angry, violent, which is what most of the fights on the Internet these days are actually about.

What the world doesn’t understand, in turn, is that constant, desperate, compulsive, escapism is really the only defence mechanism Americans have, in the face of living lives that are too scary to contemplate or think about very much at all. If your life is ruled by the idea that there might not be a tomorrow — no matter what you do, how hard you work, how much you play by the rules, that anything you’ve worked for can be taken away in an instant, right down to your life itself…well, then thinking too much about all that can only be profoundly destabilizing, if not downright traumatic.

But defence mechanisms only work so much. They can repress, bury, hide. They are ways of pretending. Sooner or later, the truth comes out — usually, bursts out, erupts out. And doesn’t that explain a whole lot about American life, too?

That’s why Americans give you that fake plastic smile — and then, lash out, suddenly, in rage. Why they’re known the world over for their violence. Why if you threaten any of these defence mechanisms in the mildest way — stocks, big cars, big houses, superhero movies, comic books, video games, Instagram, whatever — they go absolutely bonkers, erupt in a kind of disproportionate rage, like you’ve threatened them in a profoundly dangerous and personal way? You have. You’d reminded them, suddenly, how terrifying life is without all those defences — and those defences are all they really have.

Again, that’s not a condemnation or an insult. I say it an empathic way. Living in a society where life itself can become injury, harm, hurt, death, at any point, for any reason…is flatly terrifying. Of course people grow dependent, desperately, on defence mechanisms.

Still, what would we expect the net result of all that to be — of a society in which life is so scary everyone’s busy defending themselves however they can?

Well, we’d expect three things. One, that society would grow depressed, suicidal, and numb. Defence mechanisms can give you relief, but they can’t really give you meaning or happiness. That’s because meaning and happiness come from relationships. But in a society where everyone’s defending themselves from everyone else — who’s now an adversary, competitor, rival — relationships can’t really happen. And so we’d expect social bonds to break down.

And as social bonds broke down, we’d expect society to lurch and stagger into a kind of widespread collapse. Nothing would mean much. Norms and values would shatter. The thinking mind would shut down. A kind of terrible enmity would take the place of an optimistic, gentle, friendly, warm society — and norms of selfishness, cruelty, rage, violence, would harden, because all those are what you have to resort to when you yourself are in constant, omnipresent danger, when everyone else is made to be a rival, competitor, adversary, enemy, from whom you have take basics, like medicine, healthcare, money, food, shelter.…or you are just left to die.

Sadly, all that is exactly what we do see in America. Depression has soared, and suicide has skyrocketed so much that two America’s most respected economists say there’s an epidemic of “deaths of despair.” Nothing does seem to matter, and anything goes. Basic ideals like truth and dignity have lost all force or value. And norms of cruelty and rage have emerged — Americans are some of the most hostile, aggressive, selfish, and angry people you will ever meet, because, of course, they have to be, just to survive life that’s terrifying, because it’s a series of existential threats.

Much of this will have triggered some of you. “Hey! This guy’s attacking us!!” No, I’m not. I feel your pain, or at least I try to. My message is very, very simple. American life is scary. Americans think they know that — but not in a realway. They might boast about it, like a dumb frat-boy, or they might see it as a badge of honour. It’s none of those things. American life being downright terrifying isn’t a feel-good story. It’s wrong.

American life is scary, in immense and brutal ways — so much so that it’s ruled by existential anxiety and despair. The constant triggering of existential anxiety — “Will I survive this week? Month? Year? Or will it all be taken away from me? Everything I have, right down to my bodily integrity, my dignity, my humanity? My life?” — explains so, so much about Americans. Their escapism — nobody can take that level of distress constantly. Their violence, rage, hostility, aggression, cruelty — they have to pre-empty everyone else, because everyone is forced to compete against everyone else for the basics, which are kept in a condition of artificial scarcity, so the ultra rich can get richer — just to be able to survive. Remember the 26 year old who died of a lack of insulin?

Remember how that story made people around the world weep?

And therein lies the problem. Americans can’t cooperate. Because fear induces them to be aggressive, hostile, cruel, selfish — to compete for all these resources, whether money or medicine, that are kept artificially scarce, so that a tiny ultra rich few can get forever richer. But the only way out of this mess is to stop pre-emptively retaliating, and start cooperating.

American life is scary. Take a moment to recognise it. To give yourself credit for surviving it. It’s scary in a way that’s profoundly abnormal and deeply, seriously unhealthy. Scary like a tragedy, a calamity, of the human mind, body, and spirit. So scary that just getting through it without some kind of defence mechanism against the constant and very real threat of death, injury, harm, dehumanization, poverty, is impossible, and so culture and society have been warped and twisted into obsession, compulsion, delusion, even hate. It’s not this way, anywhere, really, but failed states. Of which America is now one.

American life is scary, very, very scary — but it shouldn’t be.

*Umair Haque is the Director of the London-based Havas Media Lab and heads Bubblegeneration, a strategy lab that helps discover strategic innovation.
He first published this essay in Medium 7 May