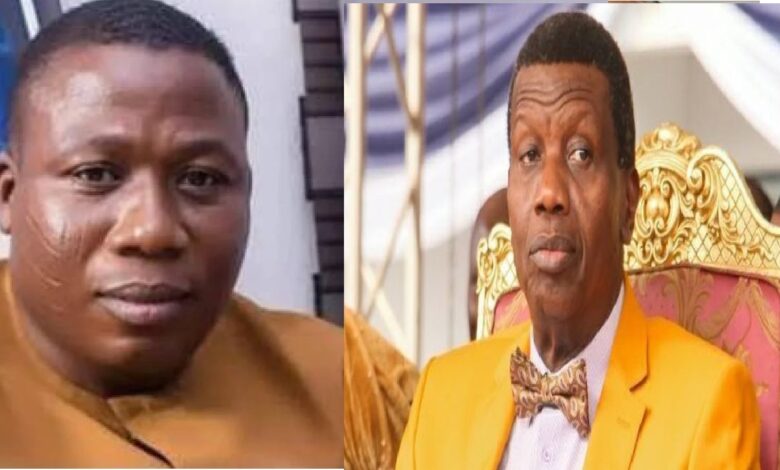 Sunday Igboho, a self-acclaimed Yoruba activist, came under attack on Sunday for mocking Pastor Enoch Adeboye over the death of his son Dare.

Igboho, in a live Facebook broadcast on Saturday night, refused to sympathize with Adeboye because the General Overseer of the Redeemed Christian Church of God has not publicly supported calls for Yoruba nation.

Igboho, instead seized the opportunity to rain curses on any leader or Pastor who refuse to support the secession agenda, saying God will kill their children and wives.

He said: “Has Baba supported the Yoruba nation that we will now be greeting him? We don’t need to greet Adeboye. What is my own with that? We are not doing church here. This is not religion.

“Pastor Adeboye didn’t speak about Yoruba nation. Look at the number of crowd in Baba Adeboye’s church. Is he not supposed to tell all of them to join Yoruba nation? We don’t need to greet him.

“God himself will start asking questions from all the enemies of the Yoruba race. By the grace of God, anybody who says Yoruba will not get to the promised land, God will kill their children and wives and their entire family.”

“Anybody who does not support Yoruba nation, those who have powers, be it pastors or anybody that has the followers, but does not support Yoruba nation, God I call on you; you’re the one who owns me and the creator of everything. Those elders who see our sufferings, who see that the Fulanis are kidnapping us and collecting ransom, but choose not to support us, as you kill their children, kill their wives. So shall it be!”

However, Nigerians took to social media to critisise Igboho for making such reckless and unbridled statements.

“My friend that used to support Sunday Igboho & praise him to high heaven, is now angry because he mocked & insulted Baba Adeboye.

“When I see retard, I know them… sadly he took him to insult your GO before you denounce madness,” Tope Ayanbisi wrote on Twitter.

Ollykween said: “I understand SUNDAY IGBOHO is not educated. It’s not too late to tutor him on how to talk while being granted an interview or better still, he should seek for a qualified media aide. Also, his illiteracy doesn’t give him the effrontery to be rude to Baba Adeboye #ApologizeNow.”

Susan Kingsley said: “Baba Adeboye’s job is to pray for the nation, and not to publicly support Yoruba nation, Sunday Igboho is ignorant.”

“I don’t blame Sunday Igboho, I blame those who gave him wing.