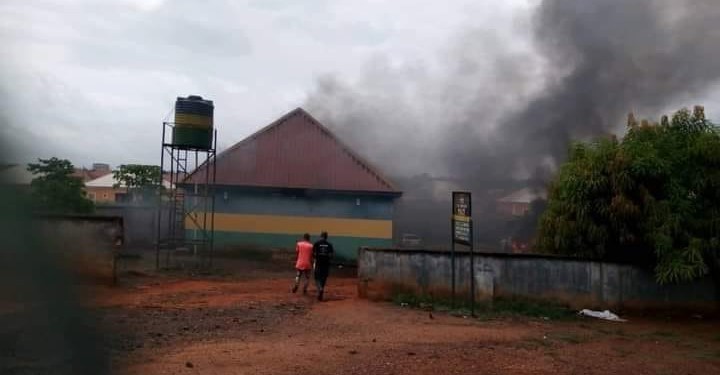 Chief John Okiyi-Kalu, the Commissioner for Information, said this in a press statement on Sunday in Umuahia .

Sunday’s attack brought to three, the police stations so far attacked by gunmen in Abia.

According to the commissioner, the perpetrators destroyed security facilities and files in the station.

He said they will not escape the long arms of the law.

Okiyi-Kalu said that “on Sunday, at about 09.45 hours, the Mike Okiro Police Station, located along Umuahia-Uzoakoli Road, close to Ubani market, was attacked by hoodlums, who came in a bus, 2 Sienna minivans, and 3 motorcycles.

“While two vehicles, two motorcycles, stationeries and office equipment inside the police station were set on fire, there were no human casualties or loss of weapons.

“The Government of Abia State condemns, in its totality, the attacks on security agents and facilities across the country.

“Our security architecture in the State is robust enough to bring them to justice.”

He expressed dismay over the attacks on security agents, especially the Nigeria Police Force, adding that this would constitute danger for everyone in the society.

Okiyi-Kalu called on the citizens and leaders to come together and evolve strategies that would bring an end to such needless and mindless acts of attacking security agents and facilities.

He said that the destruction of security facilities would create more problems than solutions, adding that venting one’s grievances and agitating for redress as provided for in our constitution is more effective than taking laws into one’s hands.

He urged the people of Abia to remain law-abiding and maintain vigilance as they go about their normal businesses, and advised them to observe the curfew hours of 8.00 pm to 6.00 am.

Okiyi-Kalu said that the state government would deploy every necessary resource in ensuring the safety of the residents and visitors in Abia, as well as bring criminal elements to justice swiftly.

He added that the government had directed all relevant agencies involved in enforcing the ongoing curfew to continue to exempt members of the public on essential duties from the curfew.