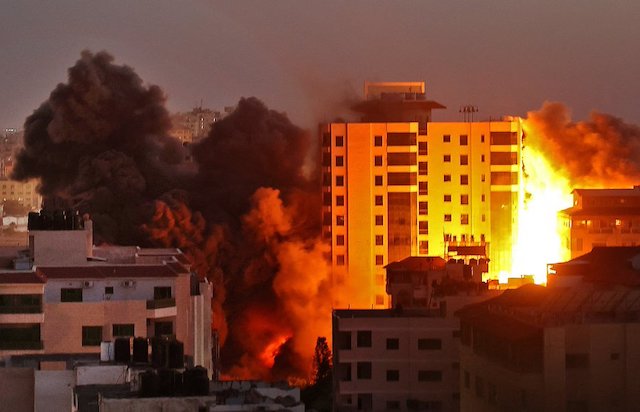 the 13 storey building in Gaza bombed by Israel

Hostilities between Israel and Hamas, the Palestinian group that runs Gaza escalated on Tuesday as each side attacked the other with aerial bombardments.

The attacks and counter attacks evoked memories of their last major conflict in 2014.

A 13-storey residential block in Gaza collapsed after one of several dozen Israeli air strikes, albeit after an Israeli warning, as Israelis reported explosions and sirens more than 70 km (45 miles) up the coast from Gaza. Thirty-one people were reported dead: 28 in Gaza and three in Israel.

Late into the night, Gazans reported their homes shaking and the sky lighting up with near-constant Israeli strikes.

As the Israeli bombing continued, the Israeli Defence Force warned the people of Gaza, that its bombs are targeted at terror.

“To the citizens of Gaza: The IDF is striking Hamas weapons stores hidden inside civilian buildings in Gaza.

“Although Hamas wants to put you in harm’s way, we urge you to stay away from Hamas’ weapons sites and get to safety.

“Our goal is only to strike terror”.

But Hamas responded with a threat of its own: to destroy Tel Aviv if the bombings did not cease.

The fighting between Israel and Gaza’s armed factions was triggered by clashes between Palestinians and Israeli police at Jerusalem’s al-Aqsa Mosque on Monday.

Even before a barrage of rockets were sent in retaliation for the destruction of the tower block, which contained a civilian Hamas office, Israel reported that 480 rockets had been fired across the border by Palestinian militant groups, sending entire Israeli communities running to air raid shelters.

The White House condemned the rocket attacks, and said Israel has a legitimate right to defend itself, but that the primary U.S. focus was on de-escalation.

The International Committee of the Red Cross urged all sides to step back, and reminded them of the requirement in international law to try to avoid civilian casualties.

Israeli Prime Minister Benjamin Netanyahu said he would step up the strength and frequency of strikes on Gaza, an enclave of 2 million people, in response to the rocket attacks.

Israel said it had sent 80 jets to bomb Gaza, and dispatched infantry and armour to reinforce the tanks already gathered on the border, evoking memories of the last Israeli ground incursion into Gaza to stop rocket attacks, in 2014.

More than 2,100 Gazans were killed in the seven-week war that followed, according to the Gaza health ministry, along with 73 Israelis, and thousands of homes in Gaza were razed.