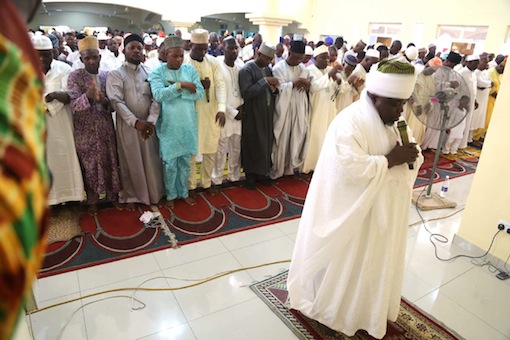 The Federal Capital Territory Administration (FCTA) has declared that there would be no Eid-el-Fitr prayers at the National Eid prayer ground.

This is contained in a statement by the FCT Minister, Malam Muhammad Bello, released on Tuesday.

Bello said the directive was part of a resolution reached during a meeting between FCTA and the FCT League of Imams Initiative led by its Chairman, Imam Tajudeen Adigun.

He explained that the objective of the meeting was to discuss the modalities of holding Eid prayers for the upcoming Eid-il-Fitr celebrations.

According to him, indoor worship are to be limited to less than 50 per cent of installed capacity

Religious authorities are advised to regulate the flow of people entering and exiting places of worship.

” All non-pharmaceutical intervention protocols of facial coverings, physical distancing and hand washing are to be observed

” All other Eid celebrations and activities should be confined to homes as all public parks, recreation and entertainment centres are to be closed

On his part, the Chairman of the FCT League of Imams Initiative, Adigun, said “In Islam, you listen to experts, those who are specialists and those who have actually discussed with us are experts in the field of medical sciences.

” In Islam, you also abide with the commands of leadership”.

“Based on this and what we are convinced of, we urge Muslim Ummah to also respect this stand of the Administration by observing our Eid prayers within our localities.”

In 2020, the FCTA cancelled eid prayers to mark the Eid-el Fitr celebration in the FCT.

This is the sequel to the statement by the Jama’atul Nasril Islam (JNI), under the leadership of His Eminence, The Sultan of Sokoto, Muhammad Sa’ad Abubakar, regarding the suspension of the Eid Congregational Prayers in towns and cities across the Federation.

FCTA said the decision was in tandem with the guidelines, issued by the then Presidential Task Force on COVID-19.

This means that all places of worship in the FCT and other high-risk States should remain closed during the recently extended period of lockdown.