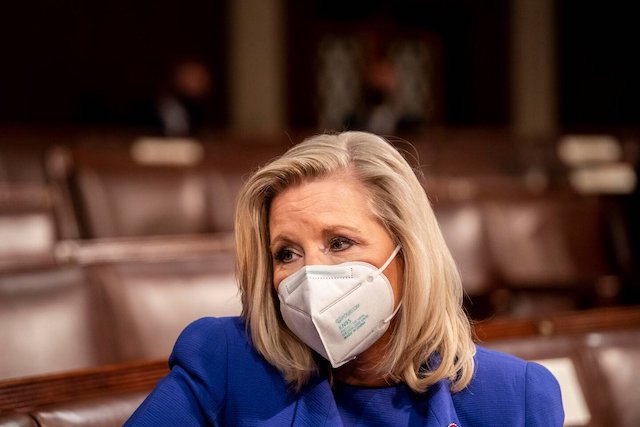 Cheney, the daughter of former Vice President Dick Cheney, voted in February to impeach Trump on a charge that he incited an insurrection at the U.S. Capitol on Jan. 6.

On Wednesday, on the floor of the House, the No. 3 Republican said the false claims of a stolen election were “poisoning our democratic system” and that anyone who makes such a claim is “spreading THE BIG LIE.”

Cheney said Republicans who subscribe to the lies are being complicit in sowing doubt in “democracy.”

“A former president, who provoked a violent attack on this Capitol in an effort to steal the election. He has resumed his aggressive effort to convince Americans that the election was stolen from him. He risks inciting further violence,” she said on the floor.

“Millions of Americans have been misled by the former president, they have heard only his words, but not the truth as he continues to undermine our democratic process, sowing seeds of doubt about whether democracy really works at all. I am a conservative Republican, and the most conservative of conservative principles is reverence for the rule of law.”

Cheney saw a quick rise in the House after first being elected to represent Wyoming in 2016, having been tapped to serve as conference chair in her second term.

Tensions began to reach a boiling point between Cheney and her Republican colleagues during the House GOP retreat in Orlando late last month, where she stated that Trump was no longer the head of the party, split with McCarthy on the scope of the Jan. 6 investigative commission.

She also said during a string of interviews that lawmakers who challenged the certification of the election should be disqualified from becoming the 2024 presidential nominee — while not ruling out a bid herself.

It was not yet clear when House Republicans will choose a replacement for Cheney in the position of party conference chair, who helps develop Republican positions on legislation and assists rank-and-file members on an array of issues.

But she has drawn criticism from some Republicans for a voting record that they portray as being out of step with conservatives.