Edo Chief Judge bows out of office May 17 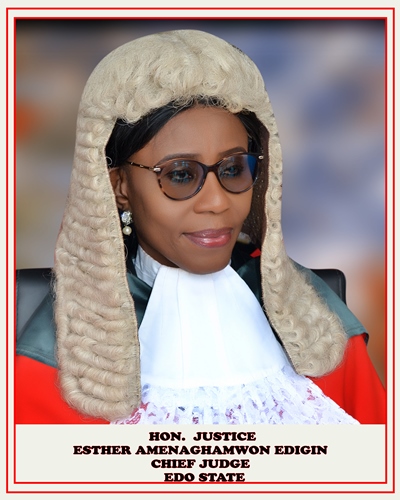 Justice Esther Edigin, the seventh substantive Chief Judge of the state, will be bowing out of office on Monday.

A statement signed by the Chief Registrar of the High Court, Mr Benson Osawaru, on Friday in Benin stated that Edigin would clock 65 years on May 17, the constitutionally prescribed age for retirement in the bench.

Consequently, Gov. Godwin Obaseki would be swearing-in the next in hierarchy, Justice Joe Acha, as the incoming Chief Judge on Monday at the Government House, Benin.

Obaseki had sworn in Edigin as the seventh Edo Chief Judge on Nov. 22, 2019, following the retirement of Justice Esohe Ikponmwen.

While swearing her in as the Chief Judge, Obaseki applauded her, noting that she had faithfully served as a judge in the state.

In 1989, she joined the then Bendel State Judiciary as Chief Magistrate Grade 11 and was appointed a high court judge in 2001.