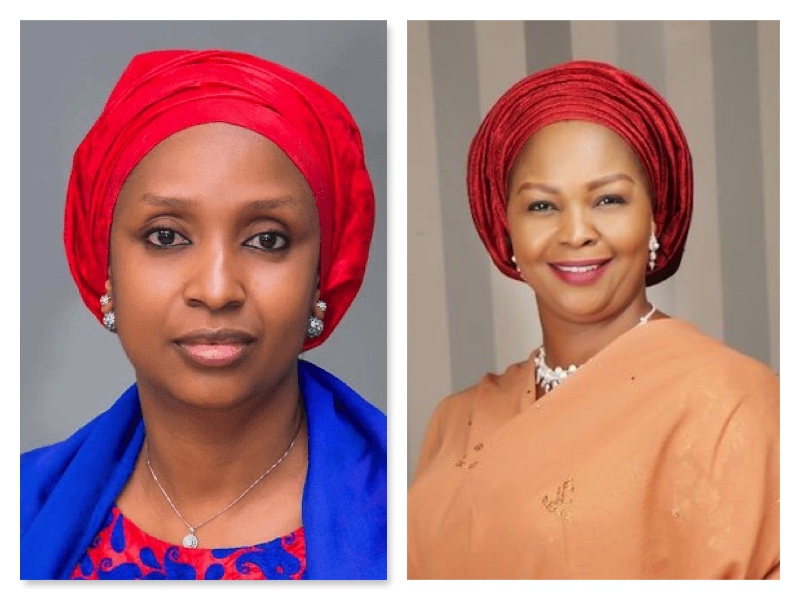 Hadiza Bala Usman and Senator Binta Masi Garba are now tearing each other apart over the management of the Nigerian Ports Authority(NPA).

On Sunday, Binta a former board member of the NPA painted Hadiza a dictator, after she unilaterally sacked her from the board after questioning the finacial reports of the agency.

Hadiza fired back today, describing Binta as an ‘agent of destabilisation’, who came to the NPA to rock it, instead of contributing to its development.

“Apart from the fact that Senator Binta Garba really said nothing substantial, making only spurious, unproved allegations in the statement she issued on Sunday, she also gave herself away as coming to the board of the Nigerian Ports Authority (NPA) to lend herself to the agency of destabilisation rather than contribute to its development.

“As I say with all emphasis that her allegations of resistance to inquiries on the finances of the NPA are false, I make bold to say that the Authority has since 2016, openly exhibited its readiness to be held to public scrutiny,” Hadiza said.

In her statement, Binta recounted how she was removed for raising observations over the agency’s financial records.

She alleged that her observations did not go down well with the suspended NPA Managing Director, Ms. Hadiza Bala-Usman.

She alleged that Ms. Bala-Usman decided her removal from the board without the knowledge or recommendation of Transportation Minister Rotimi Amaechi.

The senator said she met a senior official in the Presidential Villa and advised that the suspended MD be called to order.

She said Hadiza’s suspension has vindicated her.

“I was appointed into the board of the NPA sometime in March 2020. In January 2021, Sen. John Akpanudoedehe and I were removed from the board and our removal was clearly orchestrated by the now suspended Managing Director (MD) of NPA, Hadiza Bala Usman.

“Note, I was removed without the knowledge of the supervising ministry/minister of Transportation, which was very uncommon.

“My observations and complaints with the suspended NPA MD were more with the financial statements of NPA and I worried that if she continued so, there would certainly be trouble and her sudden removal (suspension) would be inevitable.

”I noted discrepancies, I raised observations, I asked questions, but I was completely ignored and disregarded. Answers were never provided, until my removal was plotted.”

“When the board came in, its first meeting was in June 2020 with the aim of deliberating on the financial report. I made some observations on the report which, obviously, the MD, Hadiza Bala-Usman was not comfortable with.

“At the time, the report covered two years but I objected, pointing out that, under normal circumstances, procedurally and international norms, it should cover a minimum of three years. It was after my objection that the MD grudgingly and resentfully provided the third year’s report. I wasn’t really comfortable.

“I observed more discrepancies with the financials and asked questions about them. The MD was uncomfortable and even felt slighted by the objective comments and questions.

”Scrutinizing the financial reports of the NPA is a very critical and very important aspect of my role and function as a member of its board, appointed by the President. I was not ready to abdicate that core responsibility.

“For me, my board membership of NPA, like every other public office I have held, was a call to serve my country and I was prepared to give it my all.

“But the suspended MD felt offended by my observations, questions, spotting obvious inconsistencies and acted like someone with a lot to hide. Answers were not forthcoming and, when they did, were less than satisfactory.”

Senator Masi said at a point, she contemplated resigning from the board but she was prevailed upon not to disrespect President Muhammadu Buhari.

”Some members of the board felt I was the only one holding the financial report back. I had to meet with the Minister of Transportation and I told him I wasn’t comfortable with the way and manner the board was being handled and treated by the MD and that I wanted to resign.

”The board chairman, Chief Akin Ricketts (whose removal as board chairman was also orchestrated by the MD) and some other members, prevailed on me not to resign and that, if I did, it would send the wrong signal and would not be good for the President. We settled down to work on it (the financial reports).

”After sometime, my uneasiness did not go away. Again, I met with the Minister of Transportation and told him that I did not want to continue with the board with the way the MD was running the place.”

“I met someone high up in the Presidential Villa and told him my own story and advised that the MD be called to order. I also met and made similar observations and complaints to the then Director-General of the National Directorate of Employment (NDE), Dr. Nasiru and the then Permanent Secretary of the Ministry of Transportation, Mallam Zakari.

“Instead of making amends, the suspended MD’s next move was to go against the NPA Act by designing my removal from the board.

“The Act stipulates that it is the minister who should send names of appointees to the board to the President for approval. For someone to unilaterally go against the Act and the minister that brought her on board was rather unfortunate.

“I made it very clear to everyone I spoke with about the situation in NPA, stressing that it was not about me but the system, rules and procedures, as well as the survival of our institutions.

“I could not keep quiet and watch the suspended MD run the NPA aground. I wished she had listened but she didn’t and opted to plot my removal from the board. Unfortunately, I have been vindicated.”

In her statement Monday, Hadiza said the NPA under her stewardship took several steps to ensure accountability in the authority.

According to her, the agency had signed a Memorandum of Understanding with BUdgit Open Budget System Platform and Implementation of a Public Data Dissemination programme.

Others included, “publishing the tariff regime of the Authority on the website for the whole world to see in line with the vision of transparency and accountability;

“Conducting the statutory Audit of the backlog of Authority’s financial statements for 2013-2016 and presenting the same for approval and submission to the appropriate quarters;

“And engaging internationally renowned auditing firms for the audit of NPA’s financial statements up until 2019 with full compliance to all Nigerian laws and the International Financial Reporting Standards.

She added that the 2020 financial statement is currently being audited.

Hadiza debunked the senator’s claims, asking why she did not formally document her discontent.

“There are a few questions to ask the Senator: When the Auditors presented the financial statement to the finance committee of which she was a member, did she seek clarifications on areas that seemed opaque or suspicious?

“If she did what happened? If she was not satisfied with the answers provided by the Auditors, why did she not consider withholding assent to the statement?

“Why did she not formally document her discontent? Why did she not issue a minority opinion on the statement, instead of now speaking after the fact?

“All said and done, while I concede to Senator Binta Garba’s right to whatever opinion she desires concerning our relationship when she was a board member, I remind her that those who allow themselves to be used to malign innocent people have their own days of reckoning waiting for them.”