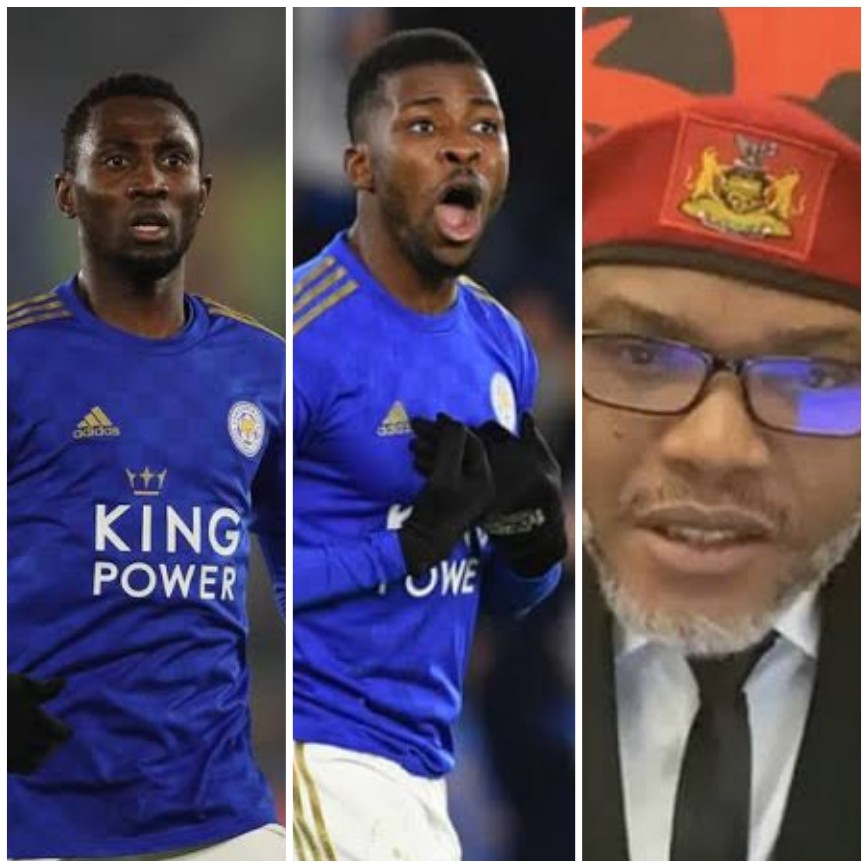 Iheanacho who prides himself as Africa’s all-time highest goal sorcerer in the FA Cup led the celebrations with the Nigerian flag while his compatriot Wilfred Ndidi also joined in wrapping the flag around themselves.

The show of affection for the Nigerian flag by the Super Eagles players gathered massive attention on social media.

However, Nnamdi Kanu was left disappointed by the two Nigerian brothers who hailed from southeastern Nigeria.

The leader of the Indigenous People of Biafra (IPOB) described their actions as shameful and told them to emulate Spanish defender Gerard Pique who always support calls for Catalonia.

Displaying the picture above, Nnamdi Kanu wrote on Twitter:

“Gerard Pique is a World Cup winner with over 103 caps for Spain. He never turned his back against Catalonia freedom. Severally, he has shown open support for Catalan freedom,”

“But our Iheanacho & Ndidi with #Zoo flag? Shame!

The statement by Nnamdi Kanu has garnered over 5,000 reactions.

Another Twitter user said: “Perhaps they don’t like Biafran concept, not everyone does & I think u should respect that too.”

One Twitter user with the name Stanley said: “Yesterday marks the beginning of the END of my support to these IGBO efulefus(Ndidi & Iheanacho) of Leicester City Football Club…Playing team, for displaying a terrorist NigeriaFlag of Nigeria disappointed in u.”

Another commentator, Ayokunle Adebayo said: “Everyone has his/her choice to make. They are grown-ups and they can stand for what seems right to them.”