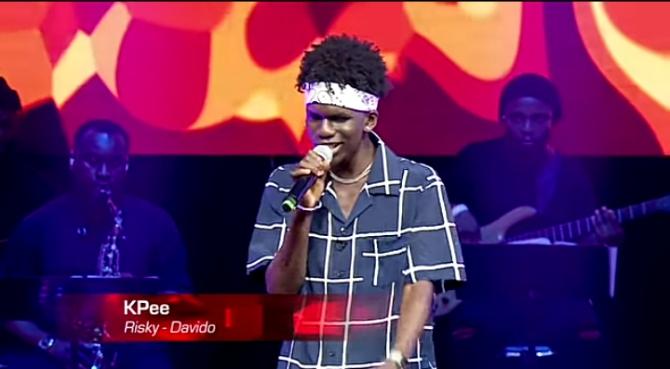 Fans were edgy when 20-year-old Oghenekpabor ‘KPee’ Okoro was sent to the danger zone by his former coach, Folarin ‘Falz’ Falana.

KPee, who is fast becoming a fan-favorite on the ongoing reality show, ‘The Voice’, gave a brilliant performance of ‘Risky’ by Davido with his own personal twist.

The rendition, however, could not save him from being sent to the danger zone which increased his chances of leaving the show on Saturday.

Unexpectedly, two other coaches Darey Art Alade and Waje immediately hit their buzzers to steal him for their teams.

As it is being done in the Blind auditions, the two coaches had to pitch their teams to KPee who eventually chose Darey as his new coach.

KPee, during the blind auditions, stole the coaches’ attention with his cover of Kizz Daniel’s ‘Sofa’.

His performance got Falz and Waje dancing as well as pressing the red button for him.

“He sang this song as if he wrote it by himself. He owned it. He owned the microphone. You have something special,” Darey said, hailing the memorable performance.

Falz’s refusal to save KPee has raised dust among fans who took to Twitter to share their thoughts.

Taiwo Oni @Onitaiwoseyi tweeted, “Why do I think Falz sent KPee to the danger zone intentionally. He knew the guy is good and stands a better chance to win in another group. Competing with Naomi Mac in the same team may not give him that.”

@KelvynnAB disagreed and wrote, “Not everything people do is well thought out, unfortunately. Falz made a terrible mistake.”

@Bernard__ said, “He had more chances in team Falz. Team Darey has Esther, Ayomikun, Dapo and lets Darey not give him “I look to you’’ to sing.

Meanwhile, some fans think KPee has stiffer competition in Team Darey and might lose his spot soon.

@Ebunoluwa_ said, “Let’s not forget Darey also has strong people on his team. KPee might end up still going to danger zone when it’s Darey’s turn.”

In agreement, @Oreofe_Bankole tweeted, “Those guys in team Darey are beasts. Have you heard of Ayomikun and Dapo? They will easily swallow KPee. Wish him the best still.”

The third season of ‘The Voice Nigeria’, is sponsored by First Bank, Airtel and Baba Ijebu.

The winning talent would go home with a monetary reward, a brand-new car, and an international recording contract.