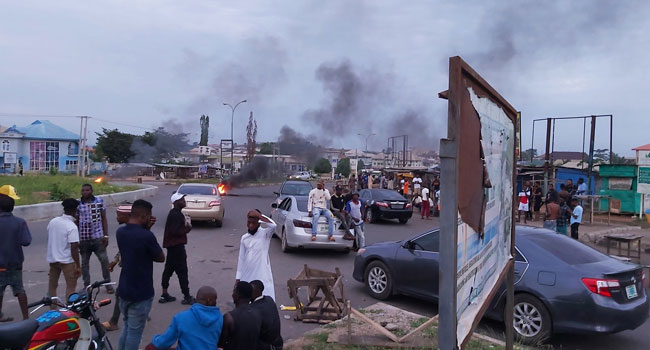 There was tension in some areas in Osogbo, Osun state capital early Tuesday morning as some youths protested raid by EFCC operatives.

In an online video, the youths were seen shouting and protesting that the operatives of the EFCC raided their Estate and were trying to tow away exotic cars at midnight.

According to reports, the EFCC operatives carried out a raid within Adetunji Estate around 2.00 a.m. to arrest suspected fraudsters but they were waylaid on their way out after arresting some suspects, seizing about 20 exotic cars.

The youths in protest set bonfires around Lameco roundabout in the capital city, in the early hours of Tuesday morning.

Reports have it that the operatives had to run into safety to avoid being mobbed by the angry youths.

Confirming the incident, Osun police Command spokesperson, Yemisi Opalola said they have been trying to control the situation from further escalation.

She also disclosed that the EFCC officials did not inform the police before they started the operation in the night.

“We are aware of the situation, we are now trying to appease the protesters and clear the bonfire so that people can go about their lawful duties without fear of harassment,” she said.

Meanwhile, the protest has generated trends on social media with eyewitnesses sharing videos of the protesting youths.

This is how EFCC officials broke into the house of suspected fraudsters!
“Suspected” in quote!

Now tell me; who are the real criminals here?
This is so unfair to the citizens of this country! pic.twitter.com/nnOSH4V91Z

Information reaching us has it that some officials of the EFCC stormed Adetunji Estate, Òsogbo in the middle of the night to raid some suspected internet fraudsters. Young men in the area have blocked major roads in the axis to disallow the officials from moving.

Yahoo Guys threatening @officialEFCC in Osogbo last night for what they described as extortion worse than SARS. pic.twitter.com/C9raHG6KRm