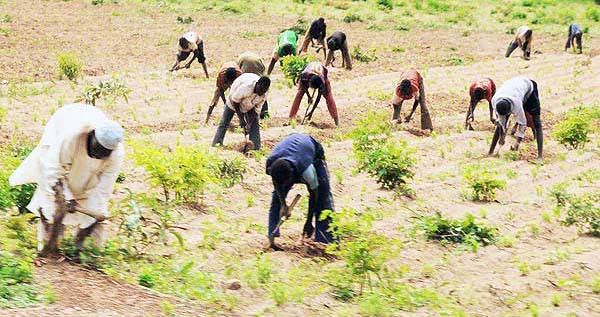 A cross-section of farmers in Gwagwalada and Kwali in the Federal Capital Territory (FCT) have decried the paucity of rainfall and insufficient fertiliser supply.

The farmers, who spoke in separate interviews on Thursday in Gwagwalada, expressed fear that inadequate rainfall could impact the crop yield negatively.

They said that crops that would most likely be affected are melon, yam and guinea corn.

Alhaji Sumaila Sani, a farmer from the Giri community in Gwagwalada Council said that inadequate rainfall would most likely affect harvest this year.

He described the present weather condition as worrisome.

Sani said that the germinated crops on his farm were beginning to shrink due to insufficient rainfall and hot weather condition in the past two weeks in the area.

“The crops need the rains to enable them to grow properly and healthy so that we can get a bountiful harvest this year.

“The yams also need steady rainfall in order to enlarge the tubers in the soil and to yield good seedlings for further planting,’’ the farmer said.

He prayed to God to send down steady rainfall to enable the crops to grow properly so he could have a bumper harvest.

Another farmer, Zaka Duza, in Kwali Council said some farmers have already started losing hope in the rainy season with some yet to complete sowing their seeds due to the poor rainfall.

Duza also said that farmers do not get government fertiliser, noting that sometimes it comes late and often inadequate.

“It is not long that I got the grass weeded and planted melon, but yet rain has not dropped ever since then.

“Some crops have germinated and the soil is already dried like we are in the dry season, which is not too good for groundnut, guinea corn and yam.

“It will make the produce from the farm look poor during harvest; that is not too good for any farmer,’’ he said.

Also, Mr Peter Samuel, another farmer said that beans do not have much problem with rainfall as they produce even with the help of the morning dew.

Samuel said that morning dew made beans produce flowers in order to bring out the seeds.

He appealed to the government not to delay the supply of fertiliser.

He added that the past few years have been bad with farmers, having to wait until the rain started before receiving fertilisers.

“The scarcity of rain will only make the leaves grow fresh and green without yielding the beans and that is not too good,’’ Samuel said.

He, however, appealed to the Federal Ministry of Agriculture to make fertiliser readily available at a subsidised rate to enhance food production.

He said that with the poor rainfall in the area, the department would look at measures to make life easy for the farmers in FCT.