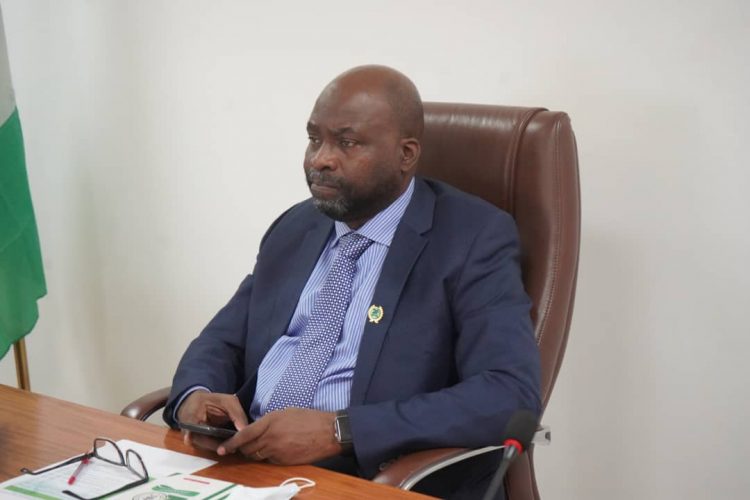 The Chairman of the Independent Corrupt Practices and Other Related Offences Commission (ICPC), Prof. Bolaji Owasanoye, SAN, has canvassed the payment of interests on stolen funds by benefiting foreign nations as part of measures to redress the menace of Illicit Financial Flows (IFFs).

The ICPC boss also disclosed that the Federal Government of Nigeria was currently reviewing legacy transactions in oil and gas, tax investments and the use of waivers in Nigeria in order to curb IFFs.

Prof. Owasanoye, who made this known at the International Conference on IFFs and Asset Recovery, held at the ICPC Headquarters, Abuja, said illegal movements of funds from African countries abroad has made the continent to be the biggest victim of IFFs.

He urged foreign beneficiaries of IFFs to deduct loans to African countries from the illegal funds in their possessions, and returned the outstanding amount with interests to the continent.

He said, “Africa is the biggest victim of IFFs. If you evaluate what we have lost as a continent against what African counties owe, Africa should be a net creditor to the world. They can decide to deduct the loans given to African countries from all the money taken from the continent, there will still be a substantial amount to return to Africa.

The ICPC Chairman advocated a workable framework that will reduce the timeframe for the repatriation of identified stolen funds and assets, decrying the huge loss suffered by the continent due to long and tedious processes which usually takes several years to complete.

Besides, Prof. Owasanoye said there were on-going efforts by the Federal Government to block illicit outflows of funds through the review of international transactions that enable IFFs.

His words: “We are reviewing the legacy transaction in oil and gas, tax investments and the use of waivers in Nigeria to close loopholes that facilitate IFFs. For instance, a lot of damage can be done through confidential clauses in loans, oil and gas contracts, and others. The review will prevent dodgy politicians from taking money out.”

A member of the Thabo Mbeki Panel on Illicit Financial Flows out of Africa, Ms. Souad Aden Osman, said that efforts to stop IFFs were more critical now than ever due to the huge level of poverty and underdevelopment in Africa.

In her lead presentation titled “Common African Position on Asset Recovery (CAPAR), Osman urged African countries to mount a coordinated effort against IFFs by taking action and speaking with one voice to recover stolen funds.

She said, “CAPAR is the bedrock for technical instrument for negotiating for funds taken from the continent to be returned. It recommends efficient recovery and unconditional return of stolen assets with due respect to our sovereignty.”

CAPAR, she added, recommended the deployment of recovered assets for the good of the citizens and not be allowed to be re-stolen.

“The recovery and return of asset must be applied for the development of the country. We should be mindful that the identified assets are at the risk of retransfer unless frozen by destination countries,” said Osman of the Coalition for Dialogue on Africa (CoDA), a civil society organisation.

In his contribution, the Chairman African Union Advisory Board Against Corruption (AU-ABC), Hon. Luis Andriamifidy, identified some of the challenges the Council face in repatriation of IFFs to include: the matter of sovereignties of countries involved, a common legal framework to be adopted, and how to proceed with court processes especially on admissibility of evidence, among others.

Andriamifidy, who emphasised the need for a policy dialogue to ensure a common Africa position, called for a strong advocacy approach both within and outside the continent.

The Commissioner of Anti-Corruption Commission of the Republic of Sierra Leone, Francis Ben Kaifala, lamented the issue of cultural differences and how assets recovery has not taken root in many African countries unlike Nigeria and Kenya.

He revealed that his organisation had in two years recovered over $3 million in cash excluding cars, houses, among others, which was more than what they country had achieved in 18 years.

He stressed the importance of developing a common legal assistance which will reduce the resources spent in chasing after IFFs by African countries.

Kaifala also recommended training, development of pressure system on international bodies, streamlining of recovery processes to make them less cumbersome, and a proper framework for the discovery and disposal of assets as part of measures address IFFs.

In her lead presentation during the second plenary session, a member of the United Nations High Level Panel on IFF (FACTI Panel), Hon. Irene Ovonji-Odida, expressed the hope that the conference will result in an increased understanding of IFFs and commitment to action which is needed to curb it.

According to her, FACTI discovered that $1.6 trillion, which is 2.7% global Gross Domestic Product, was lost in money laundering by criminals; $500-600 billion lost to tax havens by corporations and BEPS while $20-40 billion was lost to bribes to public officials in developing countries, and $7 trillion private wealth hidden by banking secrecy in advanced countries.

She said these loses were responsible for fiscal deficits, regressive taxation, criminality, low public trust, and weak rule of law, among others.

On FACTI Panel’s recommendations, Hon. Ovonji-Odida mentioned an overhaul in the international tax norms and institutions, plus a corporate tax vision including reforms on transparency; a domestic structure; law and enforcement mechanism to be reformed with increased transparency and more dynamic response to emerging risks.

In his contribution, the Chief Executive Officer, Pan-African Lawyers Union (PALU), Don Deya, opined that sustaining political will was key to the issue of IFFs.

He suggested the reformation of international tax laws and institutions while calling on investigative journalists and whistleblowers to put pressure on beneficiary countries.

Alvin Mosioma, Executive Director of Tax Justice Network Africa, in his contribution, also said that the problem was the lack of political will to concretise and transfer talk to action on the issue of IFFs.

He aligned his recommendations with FACTI and stressed the need for more political support; creation of accountability mechanism for leaders both globally and nationally; and increased capacity building for countries.

He finally charged Africa to organise and present a united front against IFFs which is affecting it adversely as a developing continent.

On his part, a reporter with Agence ECOFIN, Togo, Fiacre Kakpo, said Africa needed to take the bull by the horn by asking the international community to stop IFFs if they are not truly encouraging it.

He suggested that Africa insist on accurate tax information while ensuring that all loopholes in tax laws are plugged.