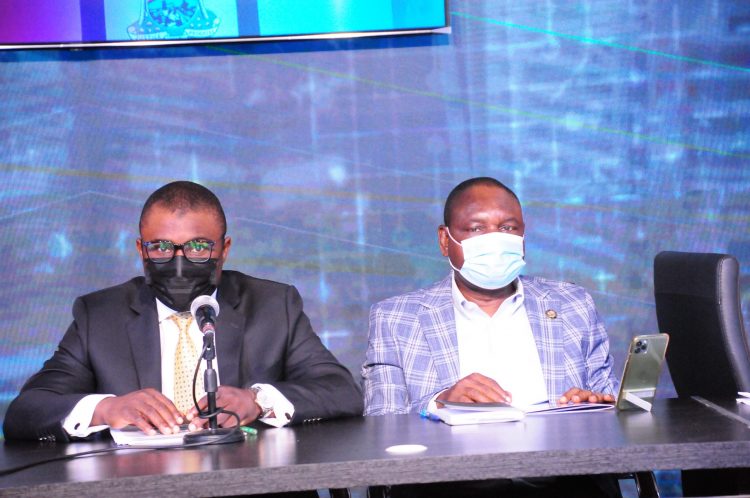 Finance Commissioner, Fabiu Olowo and Commissioner for Information and Strategy, Gbenga Omotoso at the briefing

The Lagos State Government on Thursday disclosed that it raked in N127 billion as Internally Generated Revenue (IGR) in the first quarter of 2021.

Commissioner for Finance, Rabiu Olowo disclosed this at a ministerial press briefing to mark the second year of Governor Babajide Sanwo-Olu in office, in Alausa, Ikeja.

He also disclosed that the state raked in N658 billion as IGR in 2020.

The commissioner said the government was able to achieve the feat despite effect of COVID-19 pandemic and blocking of leakages.

Olowo added that no institution or organisation is immune to economic sabotage and leakages, but that government was proactive enough to predict such sharp practices and minimise them.

“We are also leveraging on technology to predict and prevent fraud by digitalising our processes,” he said.

He said efforts would not be spared to encourage and ensure that other revenue-generating agencies of government performed at their optimum so that all the on-going projects of government could be successfully prosecuted and completed as far as possible.

“The State Government shall continually focus more on Internally Generated Revenue (IGR) by consolidating on our taxation sources. I therefore wish to use this opportunity to implore the hitherto unwilling members of the public to turn over a new leaf and willingly perform their civic responsibilities by paying their taxes promptly.

“I also encourage those that had been paying voluntarily not to relent in their support to Government in its determination to transform the State. At the end of the on-going sensitization exercise, the government will not hesitate to prosecute tax offenders in line with the extant laws governing the payment of taxes in the State,” he stated.

The state government, the Commissioner said, has recalled its N46.3 billion and N6.9 billion bonds issued under the Programme 2 Series 2, saying that the early redemption of the bonds, which have coupon rates of 16.75 per cent and 15.60 per cent with a tenor of 7-10 years, was expected to improve the State’s debt sustainability and achieve financial savings of over 1N5 billion in debt service obligation in the medium term.

He said: “Our N100 billion bond that was issued in January 2020 has been performing better. In terms of disbursement, we are at 85 per cent utilisation. This is evident from the capital projects that are ongoing. People have described Lagos as a construction site and every part of Lagos is enjoying infrastructural changes in terms of roads, housing, hospitals and schools, among others.”

Speaking on Lagos’ debt profile, the commissioner said there was no cause for alarm, stressing that the state government’s borrowing had been prudently spent on provision of key infrastructure.

Olowo said Lagos’ Debt Sustainability Ratio to the State’s GDP was currently at 17.8 per cent, which was well within the permissible benchmark set by statutory regulators – Federal Ministry of Finance (40 per cent) and World Bank (30 per cent).

He said the current administration remained committed to effective financial risk management, while leveraging partnership with the private sector towards achieving the development agenda of the State Government.

The Commissioner disclosed that the government would be reviewing some of its overheads downward to save money for capital expenditure, while also revealing the move to widen the tax net by mapping informal sector clusters.

Olowo said the State Government would be operationalising the fiscalisation of hotel occupancy, restaurant consumption tax, and draw a minimum of one million additional taxpayers into the State’s revenue generation matrix.

This, he said, is part of the sustainable financial strategy to fund infrastructure in Lagos.