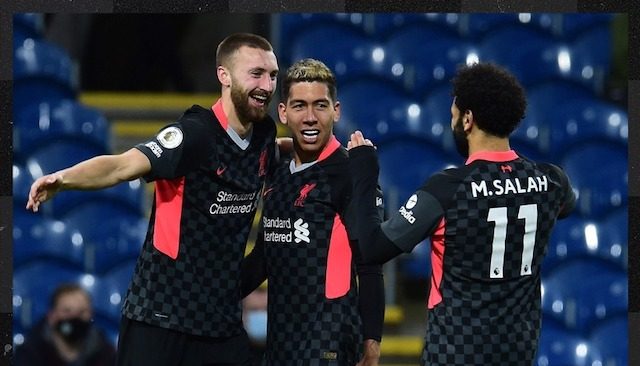 Liverpool’s late-season charge continued on Wednesday as they moved into the English Premier League’s top four, after beating Burnley 3-0.

Roberto Firmino and Nathaniel Phillips got goals either side of halt-time at Turf Moor to set them on the road to victory.

Jurgen Klopp’s side needed a last-gasp winner from goalkeeper Alisson to beat West Brom on Sunday.

But there was no need for any late drama this time, with substitute Alex Oxlade-Chamberlain firing in a late third.

It then means victory on the final day at Anfield on Sunday against Crystal Palace will see them in Europe’s premier club competition next season.

Liverpool had been wasteful in a first half that appeared set to end scoreless until Firmino popped up in the 43rd minute, providing the finishing touch to Andy Robertson’s cut-back cross.

The Brazilian was one of those to miss a clear opportunity as the visitors too often failed to trouble full debutant Will Norris in the Burnley goal.

Sadio Mane and Mohamed Salah were also guilty of failing to hit the target, while Thiago Alcantara dragged wide.

Phillips had seemingly missed his chance to score a maiden goal for the club when blazing over before the break.

But he made no mistake when getting his head on the end of Mane’s inviting cross seven minutes into the second half.

The defender used his head to good effect inside his own penalty area as Burnley pushed hard for a response, retreating onto the line to prevent James Tarkowski’s set-piece header going in.

Instead, it was Liverpool who grabbed the third goal of the game.

Oxlade-Chamberlain thrashed in a left-footed drive just seven minutes after coming on as Norris was beaten at the near post.(dpa/NAN)