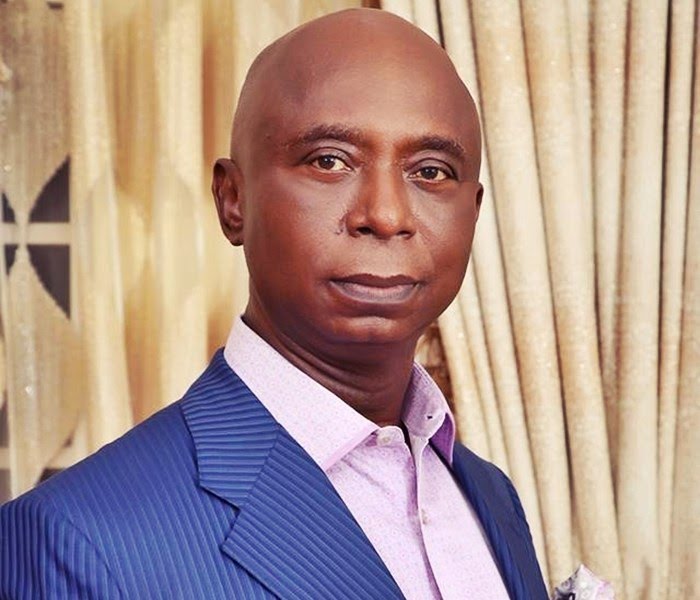 Billionaire and ex-lawmaker, Ned Nwoko has written to Premium Times (PT) to retract the “defamatory statement” against his person or face court action.

Nwoko in a letter addressed to Premium Times (PT) by his solicitor, Rolls Law Firm, demanded a retraction of the libellous publication in the online news platform and also asked PT to publish an apology in two national dailies backed with a payment of N10bn as damages for the publication of the said libel.

The letter dated 17th of May, 2021 and signed by Mr. Onyeka Nwokolo (Esq.) partly reads, “We are solicitors to Hon. Prince (Dr.) Ned Munir Nwoko (herein referred to as “Our Client”) and on whose behalf and instruction we write you this letter, our client’s attention has been drawn by several people including members of his family, friends, business associate and co-politicians amongst other well-meaning Nigerians to serials of your false publications in your news media where you maliciously with intent to bring our client to contempt and ridicule him in the eyes of the public published false, untrue and concocted stories about him.

“In one of such publications dated 5th Dec. 2020 and captioned “ How ex-lawmaker, Ned Nwoko grabbed community’s land, dislodged poor farmers”, you maliciously and falsely stated that Ned Nwoko a billionaire and former lawmaker from Delta State grabbed four acres of farmland of Ninety-year-old Oghedo Ogodi which she inherited from her husband…”

“Furthermore, the malicious and false fabrications contained in your other publication of 12th Dec. 2020 captioned: “How massive land grab by ex-lawmaker Ned Nwoko ignited fatal violence in Delta Community”. Your references to our client as a land grabber who will not stop at nothing in order to take over people’s lands gravely profiles him as an invader…our client unequivocally denies all the allegations you made against him in the said publications, and other publications by you on same subject…all of which were intended to drag his integrity to the mud. On the contrary, our client followed laid down processes in the acquisition of lands in Idumuje-Ugboko.

“The publications you made were read by the public within and outside Nigeria and it has cost our client his reputation as well-meaning Nigerians are beginning to look at our client with contempt and disdain and he is being ridiculed and openly embarrassed as a land grabber and extortionist.

“We therefore formally make the following demands from you; that you publish in two national newspapers, as well as, in your online News media statements retracting the earlier libellous publications of 5th and 12th December 2020 with an unreserved apology and the sum of 10 billion Naira only be paid to our client as compensation for the malicious, false and disparaging publications.

“This letter should be taken as a pre-action notice to you peradventure you choose not to heed to our client’s demands. 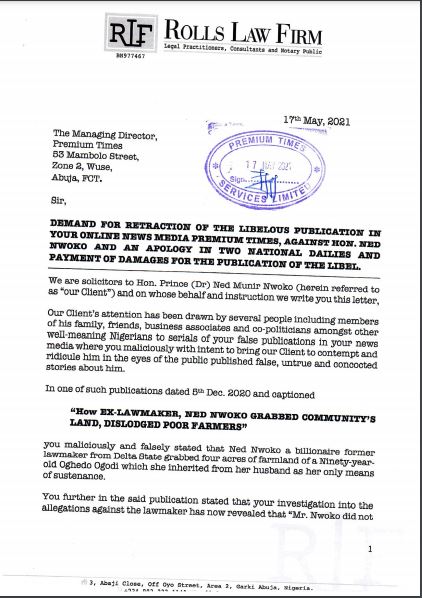 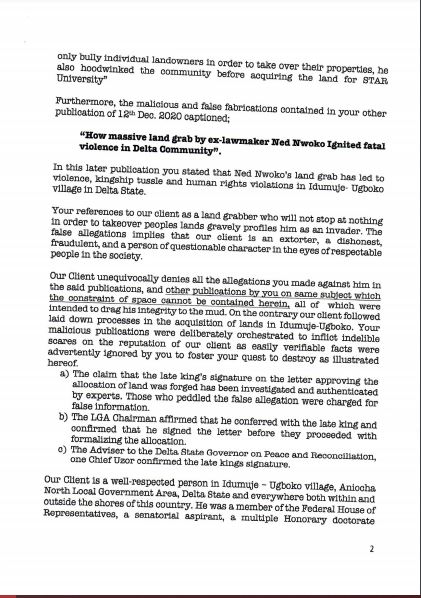 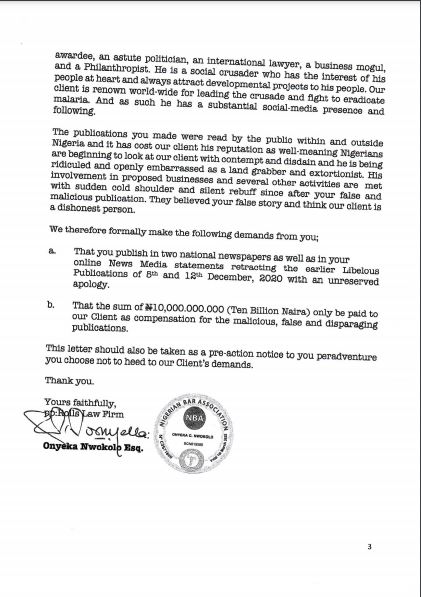 Sources close to the politician Ned Nwoko revealed that the business mogul was so miffed by PT’s publication that he has vowed to see the suit to a logical conclusion even if it has to get to the Supreme Court.

According to the source, he swore that PT turned the truth on its head.

“There is no sane writer that would so breach the facts of a serious matter. That’s pure insanity. Journalism is a noble profession but a few people choose to trivialise and violate its core values and essence.

“I believe in God and the Law. It may take years to resolve, but the truth about all the issues in Idumuje-Ugboko will be revealed.

“My life is a solemn trust. I have never, and will never take anything that does not legitimately belong to me no matter how small or big. Those who sponsor these insane reports against me will ultimately be exposed.

“They have dragged me into 22 court cases. I have won the seven that have so far been decided. Is all coincidence. I will be patient. But I have worked so hard in my life to earn my reputation. I will not allow one cynical writer or an unconscionable organisation to subject it to infamy. Never “, Nwoko was reported to have lamented.