Exodus from Congo's city of Goma as dangerous volcano erupts 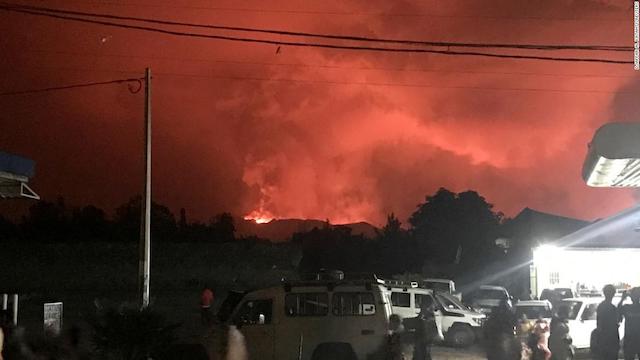 Volcanic eruption from Mount Nyiragongo in Goma Republic of Congo

A volcanic eruption in the lakeside city of Goma, in the Republic of Congo triggered an exodus on Saturday night.

Thousands of residents carrying mattresses and other belongings fled the city on foot – many toward the frontier with Rwanda.

Government also told the 2 million people living in the city to evacuate.

According to reports, lava from the eruption has approached the airport as the red glow of Mount Nyiragongo tinged the night sky above the city.

It is one of the world’s most active volcanoes and is considered among the most dangerous.

Rwanda’s Ministry in Charge of Emergency Management said more than 3,500 Congolese have crossed the border. Rwandan state media said they would be lodged in schools and places of worship.

New fractures were opening in the volcano, letting lava flow south toward the city after initially flowing east toward Rwanda, said Dario Tedesco, a volcanologist based in Goma.

“Now Goma is the target,” Tedesco told Reuters. “It’s similar to 2002. I think that the lava is going towards the city centre.”

“It might stop before or go on. It’s difficult to forecast,” he said.

Emmanuel De Merode, head of Virunga National Park, asked park employees in parts of Goma to evacuate, according a note seen by Reuters.

He said lava had reached the international airport on the eastern edge of the city but that it was not likely to reach other parts of Goma.

Celestin Kasereka, head of scientific research at the Goma Volcano Observatory (OVG), told reporters he did not think the lava was flowing fast enough to reach Goma.

A United Nations source said all U.N. aircraft had been evacuated to the city of Bukavu to the south and Entebbe in neighbouring Uganda. The power was also out across much of Goma.

Prime Minister Jean-Michel Sama Lukonde convened an emergency meeting in the capital, Kinshasa, where the government activated an evacuation plan for Goma.

“We hope that the measures that have been taken this evening will allow the population to reach the points that were indicated to them in this plan,” government spokesman Patrick Muyaya said in comments broadcast on national television.

President Felix Tshisekedi will cut short a trip to Europe to return to Congo on Sunday, the presidency said on Twitter.

On the streets of Goma, panic spread quickly.

“We are panicked because we have just seen the entire city covered by a light that is not electricity or lamps,” said John Kilosho. “We don’t know what to do. We don’t even know how to behave. There is no information.”

Others fled to the city centre from villages and neighbourhoods threatened by lava on the northern outskirts.

“We looked at the sky and saw the red colour of the volcano,” said Richard Hazika Diouf from the Majengo neighbourhood. “We have fled to seek shelter in town.”

Volcano watchers have been worried that the volcanic activity observed in the last five years at Nyiragongo mirrors that in the years preceding eruptions in 1977 and 2002.

Volcanologists at the OVG, which monitors Nyiragongo, have struggled to make basic checks on a regular basis since the World Bank cut funding amid embezzlement allegations.