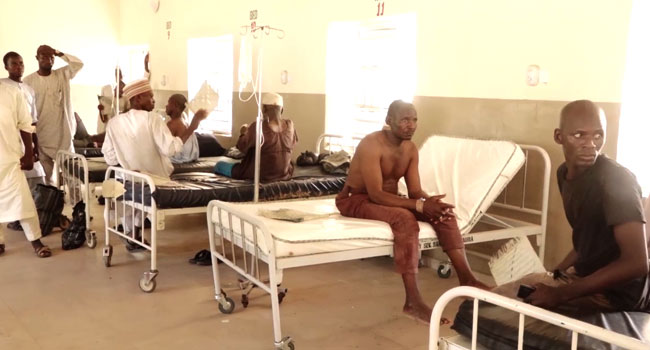 A shootout on Saturday night between Zamfara bandits and policemen under the tactical units and Operation Puff Adder, led to the death of two officers.

However, the Police Command in the state said “several bandits” were killed.

The attack in Magami was just one of the hotspots on Saturday. There were reports of attacks in five other communities.

According to a report by Channels TV, no fewer than 20 villagers were killed and many others injured during the attacks in two local government areas.

One of the survivors, identified as Umar Abubakar gave a witness report:

“In a village called Riwoji where I come from, they killed four and injured seven people, including my father’s younger brother.”

He said the injured persons were taken to the general hospitals in Kaura-Namoda, Birnin-Magaji and Gusau where two of them were later confirmed dead.

Despite the carnage in other parts of the state, the Police PRO only reported about the attack in Magami.

“Yesterday night, the command received a report that bandits in their large numbers stormed Magami town in Gusau LGA with intent to attack the community.

“The Commissioner of Police, CP Hussaini Rabiu, directed Police Tactical units, comprising of PMF/CTU/Special forces and Operation Puff Adder based in the area to synergise and ensure protection of lives and property of the people.

“The tactical units moved in courageously and engaged the assailants to a gun duel. As a result of the encounter, the attack was successfully repelled, while unspecified number of bandits were neutralised with many of them escaping with possible gun shot wounds,” Shehu said.

“Two of our operatives paid the supreme price while defending the innocent members of the communities, but there was no loss of life in the communities”.

He also disclosed that the CP had further deployed additional tactical operatives to the area to complement ongoing bush combing operations aimed at forestalling further attacks on the nearby villages.

“The CP reiterates his warning to all recalcitrant bandits in the state to either surrender their arms and embrace peace or face the consequences of their actions.

“The CP also urged police operatives in the command to aggressively defend themselves and the community in any engagement with bandits and ensure that they dominate the ungoverned spaces on a continuous basis,” the statement added.