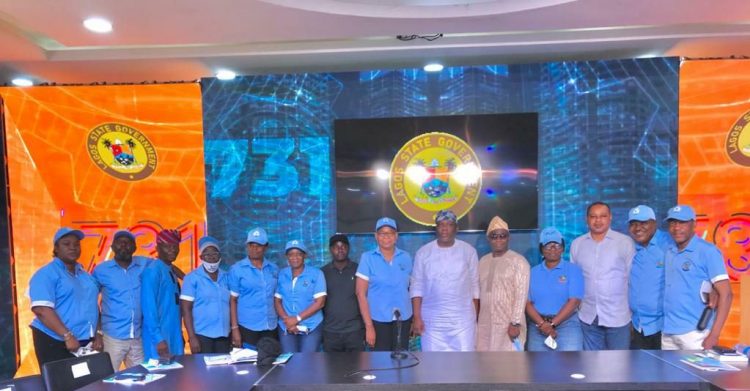 Elegushi and other top government official after the briefing

Lagos State Government on Sunday said it has captured 10,000 religious worship centres across the state in its website.

Commissioner for Home Affairs, Prince Anofiu Elegushi disclosed this on Sunday at a ministerial press briefing to mark the second year of Governor Babajide Sanwo-Olu’s administration in office.

He said the Ministry was presently in the process of imputing data of every place of worship located in the State on a centralized database to allow the State Government have a reliable data of churches, mosques and their locations, with a view to carrying them along with State Government’s policies.

He expressed the hope, that the policy, because of effective resource allocation and efficient management inherent in it, would bring about extended benefits to many more churches and mosques in the State.

“At present, the website designed for this enumeration purpose, has over 10,000 data of both Muslim and Christian Religious Organisations across the State,” he said.

Elegushi added that “We pride ourselves in saying that what divides and creates security breach in other parts of the country is what unites us in Lagos State, bearing in mind that Lagos State has become a home to people from across Nigeria and beyond.”

The governor disclosed that it has registered 400 money lenders across the State in the last two years, just as it confirmed the receipt of 74 applications for naturalization on behalf of the Federal Ministry of Home Affairs within the same period.

He revealed that out of the 74 applications for naturalization received by the Ministry, 35 applications had been screened and recommended to the Federal Ministry of Interior for approval.

Elegushi explained that the Ministry is also in partnership with foreign business owners who intended to acquire the citizenship of being a Nigerian via naturalization, saying that with this partnership of naturalization and special immigrant status, Nigeria, especially Lagos State stooc to benefit from the foreign Direct Investment while the immigrant business owners also benefitted by growing their businesses in one of the biggest markets in the world.

Speaking on the registered 400 money lenders in the State, the Commissioner stated that the Ministry of Home Affairs was in partnership with the Money lenders sector in a way that most of such organizations are mandated to register with the ministry for the coordination of their activities.

“In return, the Ministry registers, profiles and monitors the viability of such companies in ensuring that while the money lenders are in business, the general public is also protected from scammers and people of questionable characters, while also regulating the activities of the companies,” he said.

This partnership, according to him, had greatly assisted small scale business owners in Lagos to keep their petty businesses afloat without having to contend with high interest rates of the big banks, adding that this activity has contributed to the micro-economic growth of businesses in the State.